Way cool[1]. These two young men are certified geniuses and their invention will save lives. They are using low-frequency sound in a hand-held unit to douse fire. It interrupts the fire’s feeding on oxygen. Already, one fire department has ordered the prototype to test on a house fire. These boys also envision robotic swarms of butterflies using the technology to put out forest fires. Brilliant and way, way above my pay grade. It removes the necessity of water or retardant and it’s small enough to easily be stored in any home or vehicle. Now that’s true groundbreaking technology. They are blinding firefighting with science. 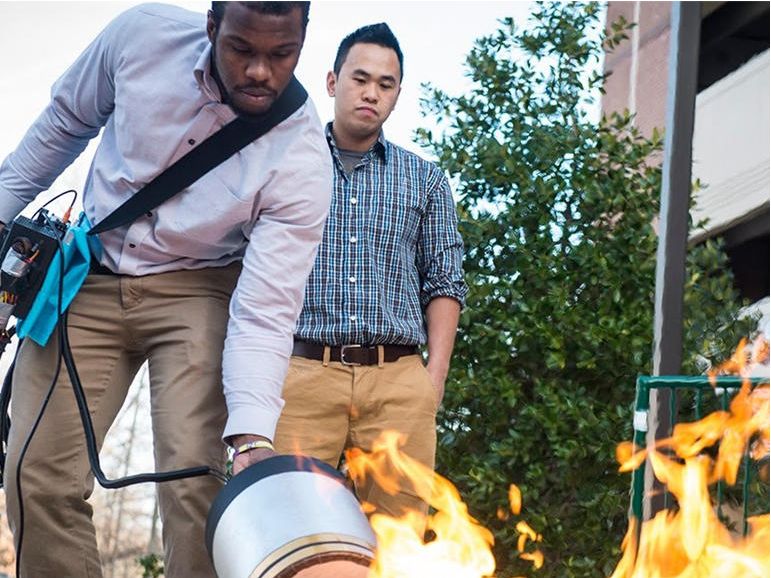 Imagine if all you needed to put out fire was a subwoofer. It’s an idea that has been toyed with, theoretically, over the years — DARPA demonstrated an acoustic extinguisher[2] in 2012, following prior experiments from other researchers[3]. Now, for the first time, a handheld extinguisher exists that uses not foam, powder or water, but the waves produced by a low-frequency sound.

The prototype extinguisher was developed by computer engineering major Viet Tran and electrical engineering major Seth Robertson of George Mason University[4] in Fairfax, Virginia. The pair hopes their design could revolutionise firefighting, particularly in the home.

The technology is based on the way sound waves displace oxygen as they move through physical space — oxygen that fire feeds on. If you can suffocate a fire, you can extinguish it, so the pair set to work. They discovered that music is unsuitable — the sound waves it produces are inconsistent.

A higher frequency sound caused the flames to vibrate, but that was all. The lower frequencies — 30 to 60 hertz — seemed to be the so-called “Goldilocks zone” at which the waves were able to effectively keep the oxygen from the flames long enough to suffocate them.

The next step was the development of a portable, handheld extinguisher. DARPA’s device, for example, was a large machine that can’t be easily moved around. The prototype they developed consists of the sound frequency generator, a small amplifier, and a collimator[5] made out of a cardboard tube with a hole at the end, to focus the waves in a specific direction.

This device was able to extinguish small, controlled fires created with an alcohol accelerant, proving that the concept is viable. Of course, the next step is further development — testing the technique on different types of fires; seeing if it can keep these fires from reigniting, since the sound waves do not have a cooling effect like water does; and examining the feasibility of developing a device that could deal with larger fires.

DARPA pioneered in this science, but their deployment of it was far too large. In the end, these boys made it look easy. It wasn’t. Although it’s a long way from being out of testing and ready for prime time, this sound enabling fire extinguisher will revolutionize fire fighting all over the world. Primary uses are seen in homes, but it has the potential to be used in monstrous fires as well, along with nano and robotic technologies. I just thrill at ideas that embody inventions and science like this. You are literally watching the future change for the better. Well done guys.