Thomas Gray lived six days, but his life has lasting impact on the world

Out of a horrific tragedy[1], comes good that benefits so many others. A little boy, a twin, who only lived six days, has had a resounding effect on so many lives out there. His mom set out on an odyssey to find where his organs and tissues were donated and what they were used for. To her amazement they were used in numerous research projects that will enhance and save countless lives. The reach of her little boy’s contributions is stunning. 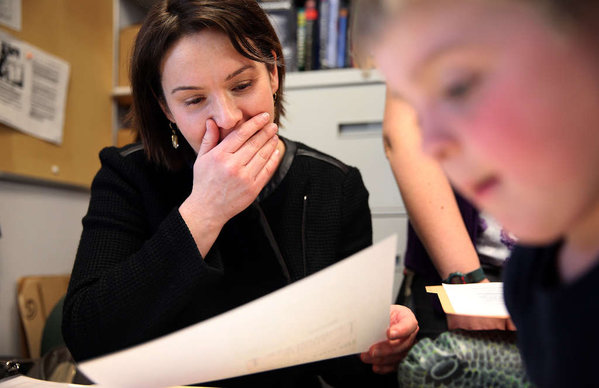 Sarah Gray reacts to research information about the donated retinas from her son, Thomas,
who died at six days old in 2010. Callum, 5, Thomas’ identical twin brother, plays during the
visit to the Hospital of the University of Pennsylvania. DAVID MAIALETTI / Staff Photographer

When she found out early in her pregnancy that one of her identical twins would die at birth, Sarah Gray began a five-year journey that culminated last week in Philadelphia.

She had to carry the sick baby to term in order to protect his healthy twin. And she also looked into organ and tissue donation.

“Instead of thinking of our son as a victim,” she said, “I started thinking of him as a contributor to research, to science.”

On March 23, 2010, Thomas and Callum Gray were born at Fairfax Hospital in Virginia. Callum, perfect, was five pounds, 10 ounces. Thomas, four pounds, was born without part of his brain. His mother nursed him, diapered him, cradled him.

He died after six days – five years ago on Sunday. Within hours of Thomas’ death, his eyes and liver were recovered and sent – along with umbilical cord blood from him and his brother – to researchers.

But that wasn’t the end of it for Sarah Gray.

She often wondered – what became of his eyes, his blood, his liver?

“It helped her get over the loss,” he said. “It was part of the healing process, seeing that there’s still research going on five years after. His life was worthwhile. He’s brought a lot of good to the world.”

“The way I see it,” Sarah Gray said, “our son got into Harvard, Duke, and Penn. He has a job. He is relevant to the world. I only hope my life can be as relevant.”

I think it is fantastic that her little boy actually went to Harvard, Duke and Penn. Thomas’ corneas were used in a study that could one day help cure corneal blindness. His liver was used in a trial to determine the best temperature to freeze liver tissue. His retinas were used in study efforts to cure retinoblastoma… to cure eye cancer in children. His cord blood, was used in research that could one day help prevent Thomas’ fatal defect where he was born with only part of his brain, anencephaly. So, you see… every life matters and because one mother gave of her son, many others will benefit from his life and their generosity.