I don’t blame Sean Spicer[1] for answering this entrapping and speculative question from the press this way. He nails it when he says there is more evidence that CNN colluded with Hillary Clinton than there is that Donald Trump did with Russia – I give you Donna Brazile. That is true so far. If the leftists have such solid proof, they should produce it and name their sources. All this unnamed sources crap and insinuations that someone could have done this or that is just pejorative and pointless. Put up or shut up.

Just look at this headline from CNN: “US Officials: Info suggests Trump associates may have coordinated with Russians.” ‘Suggests’ and ‘may have’… this definitely borders on slanderous. CNN claims to have new evidence, but every single bit of it lacks substance and is wholly lacking in honesty. The CNN story broke just a few hours after House Intelligence Committee chairman Devin Nunes (R-CA) told the media that he had discovered damning evidence that proves the Trump administration was being monitored by the Obama administration during the transition and that it had “NOTHING” to do with the Russians. This smacks more of desperation from the left than an actual case against the President. 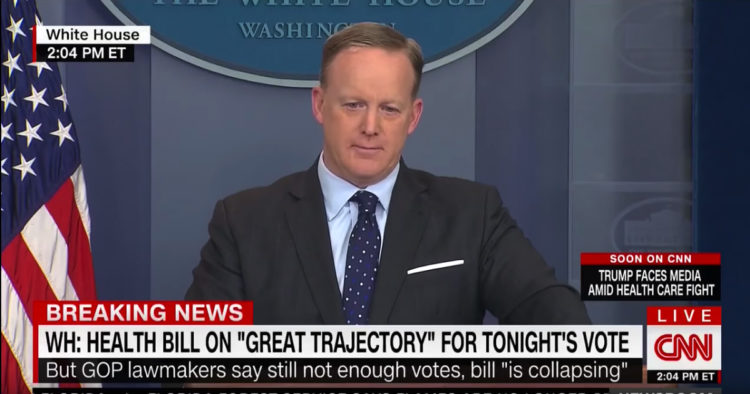 Sean Spicer just got vicious and it was perfect.

During his regularly scheduled White House press briefing on Thursday afternoon White House press Secretary Sean Spicer exposed the biased reporting in the media and uncorked a world-class zinger at the very same time. When asked about a CNN report from Wednesday night Spicer was quick to point out the hypocrisy of the media.

CNN keeps doubling down on this: “The FBI has information that indicates associates of President Donald Trump communicated with suspected Russian operatives to possibly coordinate the release of information damaging to Hillary Clinton’s campaign, US officials told CNN.” Again, nothing substantive… it is obviously conjecture. It seems to me as though the FBI is catering to the left and the NSA and CIA are siding with Trump. Bad news all the way around.

“The FBI is now reviewing that information, which includes human intelligence, travel, business and phone records and accounts of in-person meetings, according to those U.S. officials. The information is raising the suspicions of FBI counterintelligence investigators that the coordination may have taken place, though officials cautioned that the information was not conclusive and that the investigation is ongoing.” If it’s not conclusive, it’s nothing… it’s not prosecutable and it is a big, fat pile of dung. Sean Spicer is right here… the FBI didn’t go after Clinton with a mountain of verifiable evidence, but they are dogging Trump on suspicions – does that make sense to anyone?