Sad for Cosmo, but most women are able to think for themselves these days. And personally, I would rather stay with my tall, bearded, concealed carrier man any day of the week than some of the creepy men that are out there these days:[1] 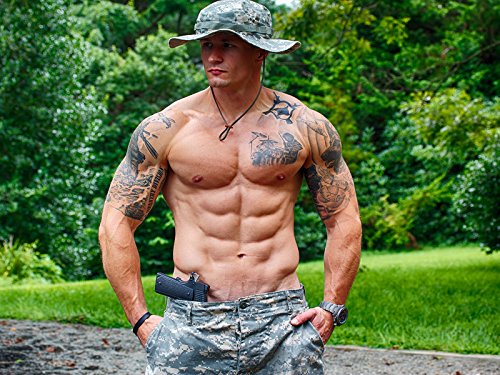 Cosmo should stick to articles about how to have the best orgasm. Though looking at today’s feminists, it may be most easily achieved through a jelly donut.

But seriously, this article on “Why You Should Never Date a ‘Gunsplainer’” is beyond parody.

First there was this video from “Everytown for Gun Safety” that we apologize for not bringing to your attention (and mocking) sooner.

We’ve all met mansplainers, but have you ever met a similarly dreadful gunsplainer? He’s the type of guy who will attempt to hit on you by calling you “schnookums” and, like the mansplainer, he will condescend to you about why you’re safer in a world where guns are easier to buy than Sudafed, or how a good guy with a gun is the best antidote to a bad guy with a gun. He may echo the words of National Rifle Association Executive Vice President Wayne LaPierre, who said in 2013, “The one thing a violent rapist deserves to face is a good woman with a gun.”
Now for a rebuttal we have this woman, this woman, this young mother, this grandmother, all of these millennials, and Hillary Duff. Damn, son.

Can liberals stop trying to tell people with vaginas exactly how they should think solely because they have vaginas? Listen, not only do plenty of women love men who own firearms… plenty of women own firearms themselves! If you’re a feminist, you shouldn’t be worried about “the patriarchy” or “gunsplainers.” You should be more worried that female-oriented media (like Cosmo) treats you like a dumbass, incapable of thinking for yourself. Who’d have ever thought that half of population earth, the half with vaginas, might actually differ in opinions from time to time? Who’d have thought that having a uterus doesn’t automatically make you an ignorant, anti-Second Amendment rube? How is this possible?

Also, note the irony in Cosmo fighting “prejudice and inequality” while simultaneously making gross generalizations about all male gun owners. I own firearms, I’ve never once used the word “schnookums.” Well, there goes your whole theory right there, Cosmo!

While we are making gross generalizations, allow me to make a statistical one. One that’s scientifically undeniable. Men are bigger, stronger, faster and more effective combatants than women. Statistically speaking, yes, the only chance a woman has against an aggressive rapist is a weapon to equal the playing field. Period. I know you may not like it, Cosmo. I know you’d rather read headlines like “Unarmed rape victim found in ditch” than “Armed woman shoots would-be assailant,” but you need to understand, the rest of us disagree.

This just another reason for me to continue to pick up ‘Guns and Ammo’ and never but another copy of Cosmo again.