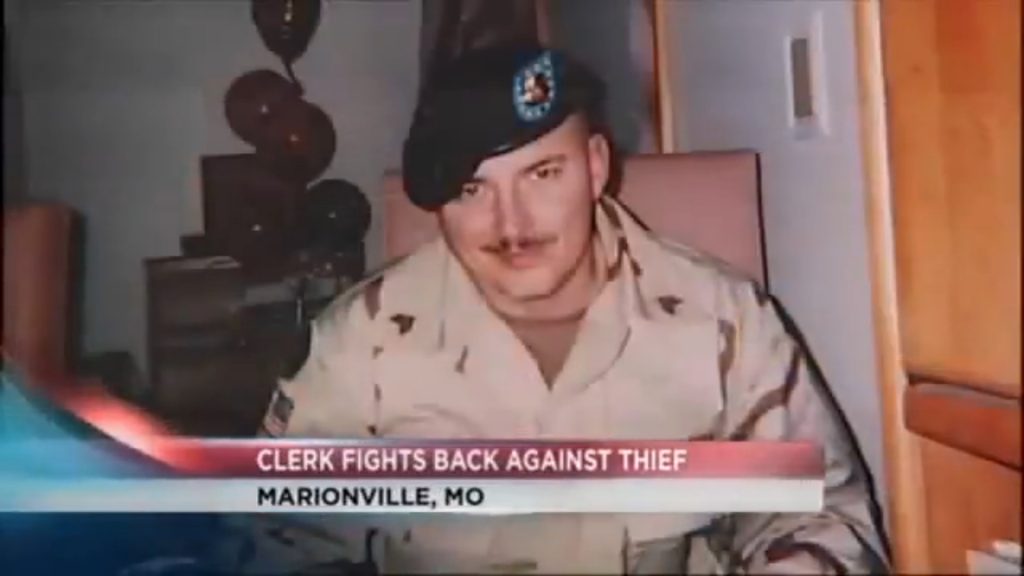 Especially don’t rob a liquor store when Jon Lewis Alexander is behind the counter.

In Marionville, Missouri, a man entered a liquor store smoking a cigarette and had his actions all caught on the security camera behind the cashier. Alexander told the man to leave the store due to his smoking, but the robber said, “You need to give me all your money.” First he smokes up his store, then he pulls out a gun? That’s just disrespectful, especially the poor grammar. It was just a bad plan all over.

In an interview filmed after the fact, Alexander told the news station:

“I pulled my weapon up and put it against his mouth and told him ‘You need to get out of here before I blow your f**king head off,’ and he backed right on out the door.”

This wasn’t bravado or recklessness on the part of Alexander. You see, Jon Lewis Alexander is an armed Iraq veteran. If you watch the video, you can see the moves Alexander makes to keep the would-be robber’s gun pointed away from his own face.

The incident may have happened in 2013, but it’s still a great watch.

Last year we wrote about another idiot robber who entered a Lay’s Food Mart in South Carolina in the early afternoon and handed a note to the cashier that read, “Give me all your money, or else.”

Huh, both robbers have poor grammar, don’t they? It should be “Give me all of your money, or else–!”

Anyway, the 44 year-old cashier looked at the man in a ski mask when he entered, telling him, “That’s not a good look to be walking into a store,” and when the robber put the note on the counter and made as if he had a gun, cashier Wayon Fields, a former correctional officer at the County Jail, pulled out his own pistol. He said that he usually had his pistol on him because his ex-inmates usually recognize his face.

At the time, two customers were pumping gas outside and said the masked man ran away after the short struggle that was exchanged between Fields and the robber. When asked what would’ve happened if the robber had indeed been carrying a gun, Fields responded that he “would’ve shot him.”

If you needed a reason to stop holding up gas stations and liquor stores, the sheer number of ex-military and ex-law enforcement looking to have a quieter gig, but who are still prepared to make your day unpleasant, should be more than enough.