Let Sarah Speak! Do Your Part To Help Sarah Palin Get A Speaking Slot At The Republican Convention 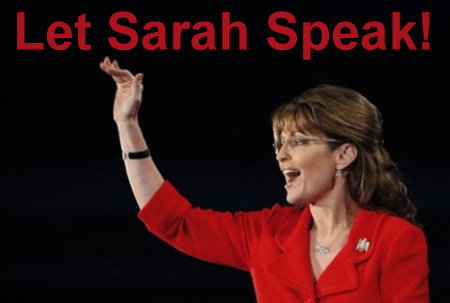 In 2008, after Sarah Palin became our vice-presidential nominee, she instantly became the most prominent woman in the Republican Party. Since then, she has relentlessly supported the Tea Party and in 2010, she was one of the most valuable players in the best year the GOP has had in half a century. During that election cycle, she endorsed candidates like Nikki Haley, Renee Ellmers, Kristi Noem, Susana Martinez, Chris Christie, Sean Duffy, Bob McDonnell, Tim Scott, Rand Paul, and Allen West. Additionally, there are few people who would dispute that Sarah Palin is a dynamic speaker with a large fan base in the Republican Party.

What this all adds up to, as Ed Morrisey noted over at Hot Air[2], is that Palin deserves a chance to speak at the convention.

Palin electrified the convention in 2008, and it’s just good manners to have the #2 from the last ticket speak at the next convention. Few people in the party can fire up the grassroots like Palin does, and few people will draw the attention she gets. If there is still room to offer her a speaking slot, the convention should do so, and do so quickly.

Yes, we want Mitt Romney to win, but we also want to make sure that everyone knows the bad old days of the Republican grassroots suffering in silence while our “leaders” in D.C. make decisions we don’t agree with, are over. Right Wing News alone can’t generate enough signatures to make a difference. If it’s going to happen, it will be because YOU think they should “Let Sarah Speak.” So, if you agree that Sarah Palin should be given a speaking slot at the convention, then send a message by signing this petition. If you really feel strongly about it, email it out to some friends. Add the petition to Facebook, Twitter, or G+. Stand up, get the word out, and let Sarah Speak!

PS: Some people claim Palin was offered a speaking slot and turned it down. However, that’s not what her gracious public statement about the matter actually said[3]. Moreover, not only has the Romney campaign refused to comment[4], I reached out to the RNC yesterday and it also had nothing to say. I was referred over to Pam Stevens, who’s the Deputy Press Secretary for the 2012 RNC. She didn’t respond to an email about the subject. When this many people are deliberately staying silent when they could just say, “We invited Palin to speak and she declined,” it tells you all you need to know.