The 2015 South Carolina Tea Party Convention really started to take off this year. The event sold out, which isn’t a big surprise given that the group managed to bring in speakers like Ted Cruz, Ben Carson and Donald Trump. The people behind the convention, Joe Dugan and Gerri McDaniel (pictured below with Ted Cruz) really did a remarkable job of putting it all together. 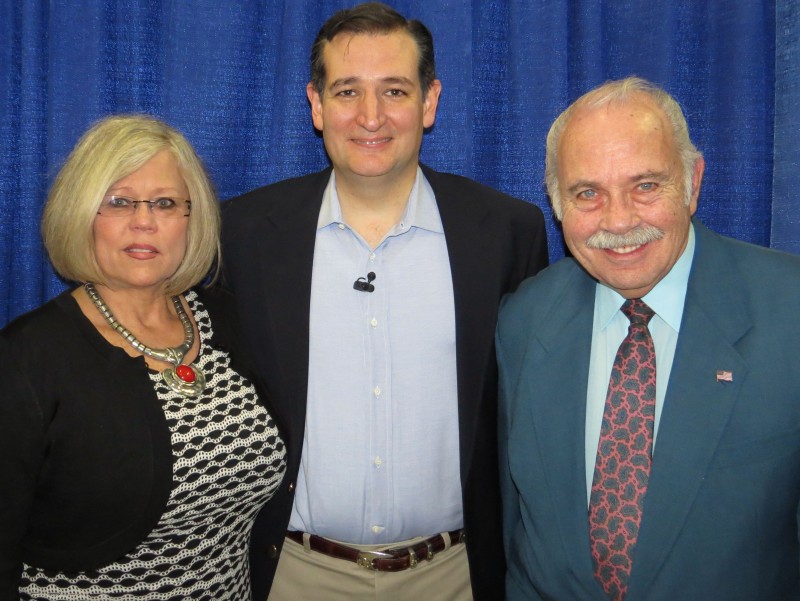 [1]
Of course, people are naturally interested in how the biggest names did.

The guy who put on the best pitch-perfect performance I’ve ever seen from him was Ted Cruz. He had the crowd in the palm of his hand, delivered killer lines galore and was just dominant. If you want to know what a candidate who is talking to Tea Partiers should sound like, this is it.

“You know what electability is — nominate the candidate closest to the Democrats.” — Ted Cruz #SCTeaParty15[2]

Washington says don’t fight this fight because fights involve risk & that means you might lose. That’s how you lose! -Ted Cruz #SCTeaParty15[2]

My initial impression of Carson is that he’s extremely likable and someone I’d love to see run for the House and Senate, but not for the White House because of his inexperience. The fact that his team seemed to be guarding him like he was in danger of being assassinated as he walked through the main convention hall before he was taken downstairs and turned loose in the crowd, confirmed that. I really like Ben Carson, but I’m not sure he’s ready for this challenge, but I guess we’ll see soon enough! 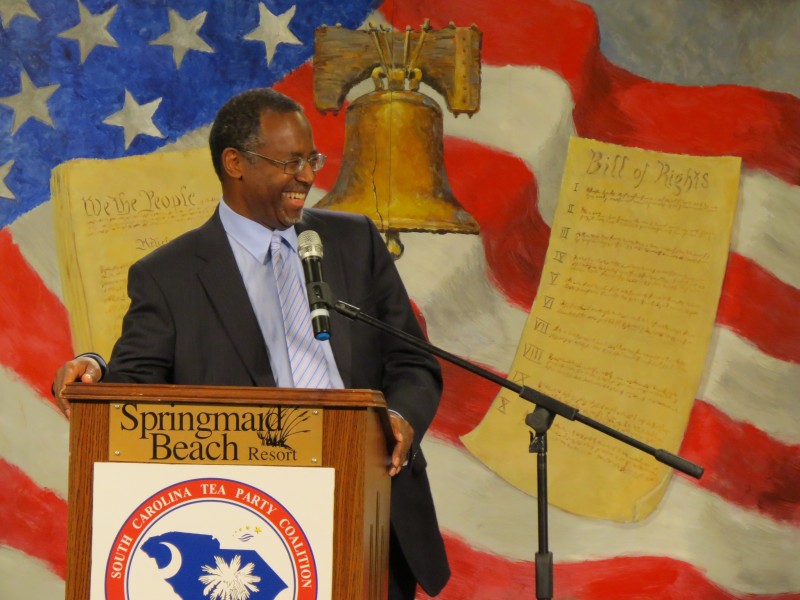 He has a few more grey hairs since the last time I saw him, which makes him look more presidential. That probably helps, although in a field that will be full of blue chippers, Santorum will definitely have an uphill battle to get into the top tier of candidates.

Of all the candidates, unsurprisingly, Donald Trump made the biggest splash. He invited some of the press out to meet him on his customized 757.

It was pretty impressive and Trump himself was waiting by the door to greet us. 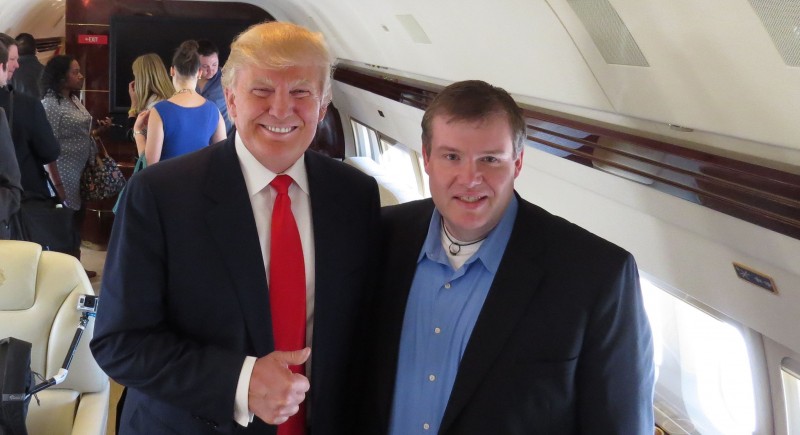 Unfortunately, Trump’s speech wasn’t up on YouTube at the time of publication; so we couldn’t run it. Although the speech didn’t get very deep into specifics, it was well received — and he took some shots at Mitt Romney and Jeb Bush.

“With (Jeb) Bush, he’s weak on immigration, he wants Common Core and his brother gave us Obama.” — Donald Trump #SCTeaParty15[2]

Last but not least, although she’s unlikely to run, Sarah Palin sent a specially-made video for the event.

This prompted tears from one of the world’s biggest Sarah Palin fans, Gerri McDaniel, whom the rest of the staff had deliberately surprised with the video. 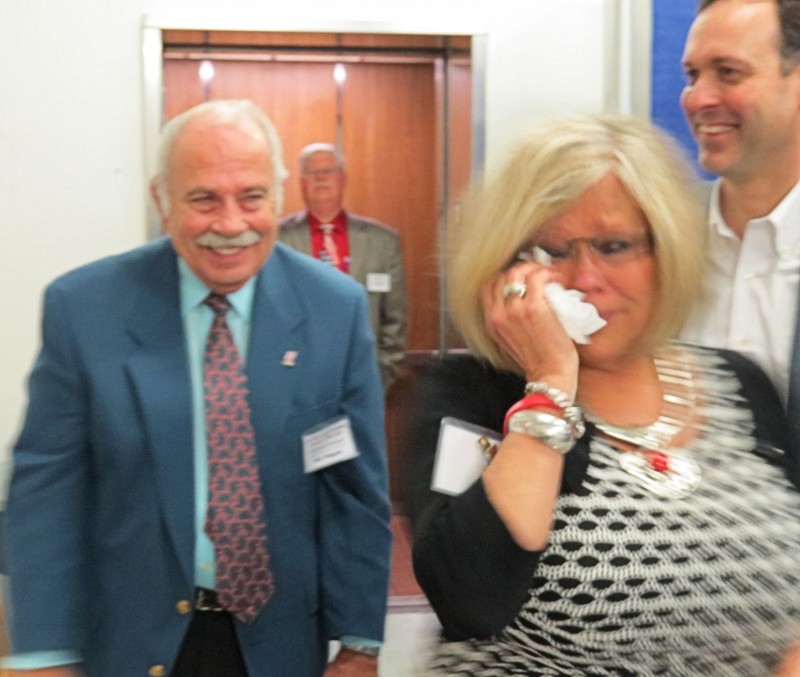 [9]
There were quite a few other speakers at the event as well and one, my friend Kevin Jackson, did a particularly good speech. Also, good job Jake MacAulay!

There were a lot of congressmen at the event as well including Louie Gohmert, Jim Bridenstine, Jeff Duncan, Mark Sanford, Tom Rice and Mick Mulvaney. The main topic of conversation for these guys turned out to be the vote for Boehner as Speaker. The crowd LOVED Gohmert, Bridenstine and Duncan for having the courage to vote against Boehner. Gohmert, who ran for Speaker, had some particularly interesting inside information.

He said that even though he was running for Speaker, he knew he couldn’t win, but was trying to get to a second ballot so someone else would have the opportunity to defeat Boehner. He also said that another congressman admitted to him that he had more than 1000 calls from constituents, all of which were asking him to vote against Boehner as Speaker. Yet that congressman? He voted for him. 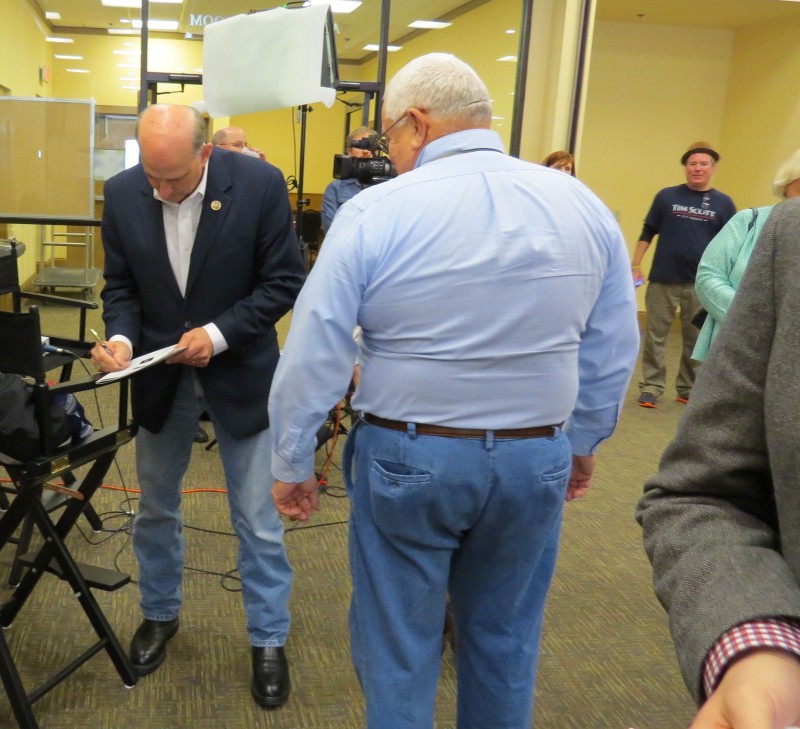 I had an opportunity to ask both Gohmert and Bridenstine why a guy like Boehner, who’s untrustworthy, weak, is a poor strategist, lacks charisma and is disliked by many conservatives is able to hang on to the Speakership. Basically, they both said that he has a lot of power to hurt people who go against him if they fail to knock him off. He controls who gets onto committees, who gets their names on bills and he can even reach out to donors and have their funding cut off. So, even though Boehner is widely disliked by much of the caucus, they’re afraid to take him on unless they feel like they have someone who can plausibly knock him off in an election.

Towards that end, Gohmert was pushing for a simple rule change:  a secret vote of confidence on the Speaker after each cycle. If the Speaker can’t get the majority of Republicans in the House to vote his way, then he couldn’t run for reelection. That’s a great idea that would certainly improve the quality of leadership in the House, but if only a few conservatives like Gohmert, Bridenstine and Duncan have the courage to take on Boehner, I’m not sure how feasible it is.

Selfie with the crowd from the stage at SC TEA Party Convention! #TCOT[13] #SCTeaParty15[2] pic.twitter.com/PjFduAtBFd[14]

Additionally, it’s worth noting that although Mick Mulvaney is a pretty conservative congressman, almost his ENTIRE SPEECH was spent giving an extremely defensive explanation of why he voted FOR Boehner. He sounded like a man who had done something that he found morally repugnant who was trying to intellectually rationalize it to himself and everyone else at the same time. To top it all off, he said this….

“You want somebody who is more conservative & a better Speaker…. So do I! ” — @RepMickMulvaney[16] who voted for Boehner #SCTeaParty15[2]

When the people who are voting for John Boehner are saying that publicly, you know they’re feeling the heat (PS: They should be. Good job on that front, Tea Partiers!)

All in all, this was a fantastic convention and next year, when all the presidential candidates have declared and will be  jockeying for a position in South Carolina? Let’s just say that this little ol’ Myrtle Beach Tea Party Convention is going to be one of the hottest political tickets of the year.