The odds of this happening[1] have to be astronomical. Two horses were killed in the Preakness Day undercard race and a jockey was seriously injured. Homeboykris had just won his first race. He then promptly dropped dead. Then Pramedya collapsed on the turf and broke her leg. She was euthanized on the track. Her jockey fractured his right clavicle in the fall and is in the hospital. It’s tragic. The first horse was 9 years-old and the second was 4. Bad luck doesn’t quite cover this one. 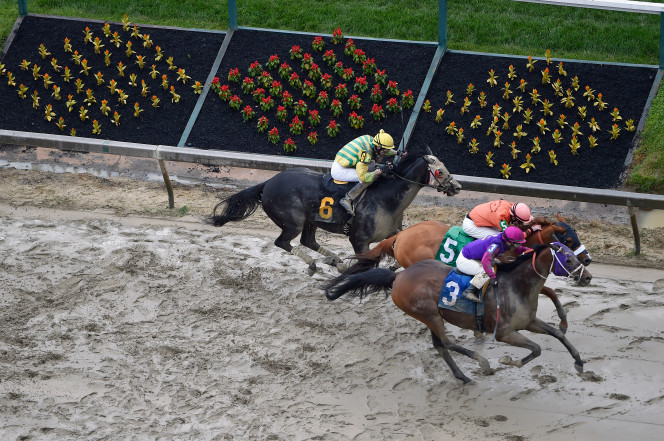 BALTIMORE — Maryland-bred Homeboykris, a 9-year-old horse that ran in the 2010 Kentucky Derby, collapsed and died after winning the first race at Pimlico Race Course on Saturday, according to a Pimlico official.

More misfortune struck in the final turn of Race 4 when Pramedya, a 4-year-old filly running out of the No. 8 position, collapsed on the turf and suffered a left-front mid-cannon-bone fracture. She was euthanized on the track.

It was just her fifth career start.

In the first race, Homeboykris came from behind in the final stretch to win a close contest as a 9-1 underdog and then collapsed on his way back to the barn from the winner’s circle. His trainer, Francis Campitelli, who grew up near Pimlico, was in the grandstand when Homeboykris collapsed. “So apparently, not long after leaving the winner’s circle, the boy that takes care of him said they had gone probably 100 yards, and he got wobbly and fell over and he pretty much was dead when he hit the ground,” he said. “They’re thinking at this point it was some sort of heart attack — you know, ruptured aorta or something like that. … The horsey was a champion. I mean, he went out a winner,” Campitelli said. “He was a brave horse at his age. And this was a very tough race that he was in today. … He ran a great race. We’re all proud of him.” What a loss for both of these owners. My prayers are with the jockey who must be in a great deal of pain. Sometimes, luck just runs out.