Alright! We get it. The NFL is now a league of privileged look-at-me wannabe activists. They have made themselves abundantly clear on that. But could someone answer just one question? Why did 3 of the Dolphin players take a knee during the American National Anthem, but stood for “God Save The Queen”? 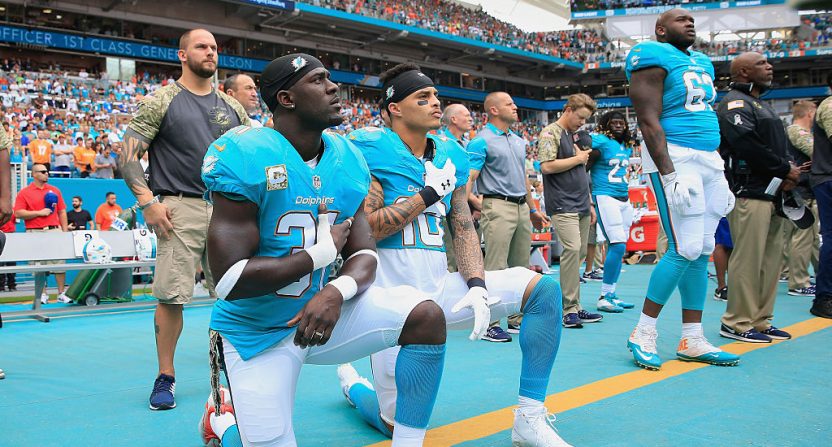 The reason I ask is because there doesn’t seem to be any clear, cohesive way to protest for these guys. Is it the knee or the fist? Is it taking the knee during the anthem, before, or after? Is it staying inside the tunnel for the anthem, or is it sitting?

Honestly, this don’t even feel like protests anymore. Seriously. It just looks like some players here and there, or a team here or there, sporadically trying to bring attention to themselves. I have yet to learn anything about what they are supposedly protesting. What are they protesting? Also, why the hell would you take a knee for your own National Anthem, yet stand for the a nation’s anthem that controlled the largest share of African slaves during the Atlantic Slave Trade?

Nothing makes sense here and it seems like everything is just discombobulated. No thanks. I really do feel like these players are just beating a far past dead horse here, because I don’t feel any power behind their actions. Just empty movements.

The players on the Dolphins who joined in the odd time to kneel, were Kenny Stills, Julius Thomas and Michael Thomas. They took to their knees during the National Anthem, and ended up doing what they have the right to do…and that they are also showcased on how douchey they are as well.

This is no new move by Stills and Julius Thomas. They have done this kind of look-at-me showcase before. It was only Michael Thomas who was the newbie to the kneeling scene.

The Saints also got some action in as well, though in a different manner than previously showcased last week. What? No consistency, fellas? One time is enough of a protest?

The Saints tried out a new, idiotic way of protest, by trying to find a middle ground…they all knelt before the anthem was played, but stood when it was played.

Seriously! This is just straight stupid! Either kneel the whole time during the anthem, or just do what you guys used to do and just STAND! What’s with all this middle ground fighting? Either go ALL IN, or get the hell back to playing football like you are paid to do!

Entire Saints sideline kneeling as a team… for the cointoss. Not the anthem. pic.twitter.com/gVYYjjhvYg[4]