What a cool way to learn to snowboard[1]. This little one has a champion for a father who started teaching her to snowboard when she was not even a year old. The video is fantastic. The child will probably grow up to be a champion like her father – I bet her brother does as well. Klassen knows just the right kind of snow and where and when to take out his little tandem passenger. I can’t even snowboard by myself, so I would not recommend the average snowboarder trying this with little kids. What a way to have fun with dad in the snow! A very cool way to grow up. 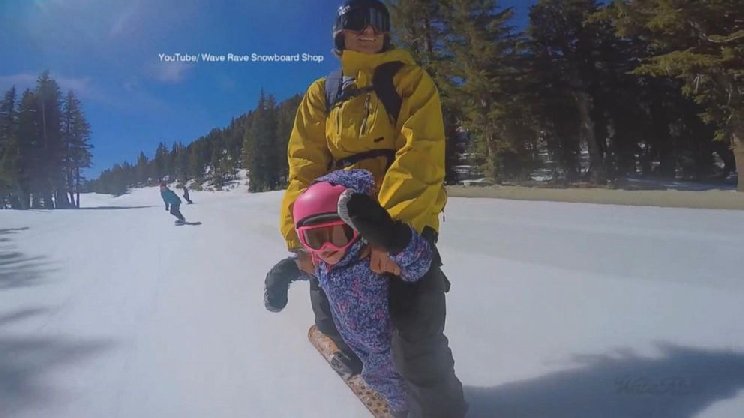 This toddler may only be 3 years old, but for her birthday, she’s already shredding the pow[2].

That’s because her daddy is extreme snowboarding champion Steve Klassen, whose skills on the slopes have rubbed off his tiny protégé.

“She really does love it,” Klassen, 50, said of his daughter, Kinsley. “It’s just a normal thing for her, like jumping on the trampoline or kicking a soccer ball.”

In honor of Kinsley’s 3rd birthday, Klassen compiled this impressive video[3] of six of their days on the slopes, which has now gone viral with nearly 260,000 views[4].

“Your adventurous spirit and our teamwork have created an amazing and magical time for us. I could even call it pioneering,” the proud father writes of his daughter. “Thank you for bringing this experience to my life. I love you with all my heart, Dad.”

Little Kinsley has been snowboarding with her dad since before she was even 1, but the tandem-riding tradition actually began with her older brother, Kaden.

“I had learned tandem with my son,” said Klassen, who lives with his family in Mammoth Lakes, California. “We rode a lot for three years until he would not do it anymore and just wanted to ride his own board. I had her doing tandem before she could walk, as soon as she could support her own weight. You hold their shoulders so you help them take any force off their feet by holding them up. It was also good to get her used to a helmet and goggles at such an early age.”

Kinsley is one of Klassen’s favorite snowboarding buddies, going with him about half the time he rides.

“I figure that she has over 100 miles of riding already,” he said.

Being a professional, Klassen, who also owns Wave Rave Snowboard Shop[5], said he knows the best types of conditions to make for the safest rides for his small children.

“Riding around on the right kind of snow is safe,” he said. “Do not do it on an icy day for your first time. Slush is best.”

He also adds this safety precaution in the description[6] on his video: “All riders shown here are professional snowboarders who have been riding for many years. Know your skill level, and do not exceed it when riding tandem. While extremely rewarding, riding tandem can also be dangerous. The best advice we can give is this; Stay within your limits so you never fall.”

As for his little birthday girl snowboarder-in-training, Klassen said she calls the shots most of the time they’re on the slopes.

“It is amazing to share the tricks which are done through cooperation with her,” he said. “She is so proud of herself. She tells people she does flips snowboarding. Most of the time, Kinsley is telling me what she wants to do — like, ‘Hit the jump over there,’ or that she wants to do a certain trick.”

Klassen hopes the video will inspire people to try snowboarding with their own kids because, “It really is an amazing and special thing to do,” he said.

This is probably the best present this little girl could get and she looks like she loves it more than anything else. She’s becoming confident and more and more adventurous on the powder. It would be cool to watch her as she grows up while snowboarding. Dad says he’s even learning things from her and this is indeed, a pioneering of the sport. You can’t start any younger than this and it lays the foundation for a possible future Olympian. This is just fantastic – really love watching them snowboard.