The Dallas Cowboys used to bill themselves as America’s Team. No longer. Now they are Malcolm X’s team. That’s owner Jerry Jones in the middle of a disgusting display of anti-American moonbattery: 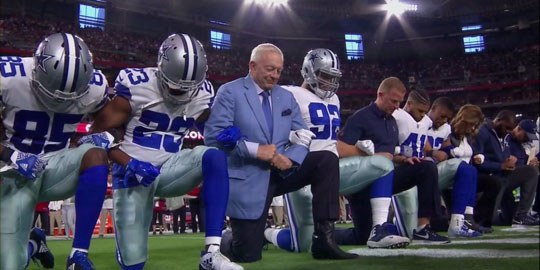 It is also America’s sport no longer. Professional football has been taken over by lowlifes who despise their own fans, and who would be pulling Michael Brown style strongarm robberies of the local convenience store if they didn’t happen to have athletic talent.

Rooting for players who publicly disrespect the national anthem doesn’t fall far short of burning Old Glory. Anyone who watches the NFL at this point is nuzzling the buttocks of Colin Kaepernick, who set the league’s current standard for patriotism.

So far baseball has produced only one cockroach unwilling to stand for the anthem: Bruce Maxwell. He fittingly plays in Oakland, where the Black Panthers originated. Don’t expect his antics to spread, although the moonbats running MLB would do nothing to discourage it. Despite a high percentage of baseball players being foreign born, the sport is far more patriotic than football, due to the higher personal caliber of the athletes.

As for NASCAR, no driver would behave like NFL players — but any who did would fittingly be fired.

The diamond-encrusted Neanderthals on the field, coaches like Mike Tomlin, owners like Jerry Jones, and of course the odious commissioner Roger Goodell all seem to believe that the NFL does not need its fans. Wrong. It’s the fans who do not need the NFL.

But at least the NFL can still count on Sheila Jackson Lee as a fan. They deserve each other.