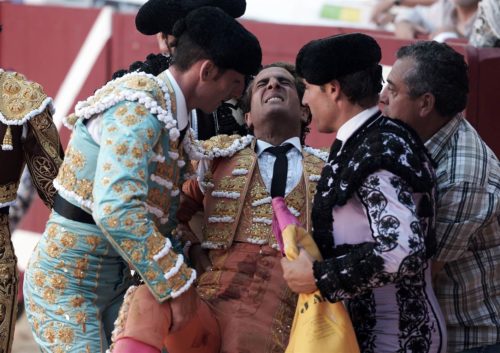 At a bullfighting event in France, a star Spanish bullfighter[2], Ivan Fandino, 36 years-old, got his feet caught in his cape, fell and was gored to death by the bull he was fighting. He had fought this particular bull previously and cut off its ear. Fandino leaves behind a wife and a baby girl. 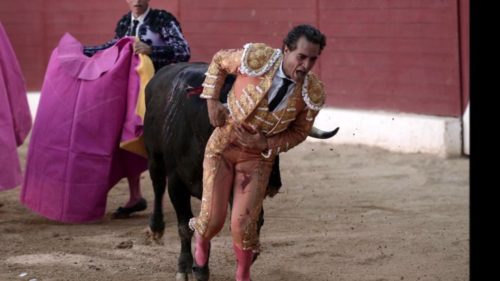 Bullfighting became popular in Spain during the medieval period. It took hold in France in the 19th century. Bullfighting is a controversial sport in which bulls are fought and slowly tortured to death by being stabbed multiple times in a match against the matador. The bull rarely wins and even if it does, it goes on to fight again until it dies in another match. 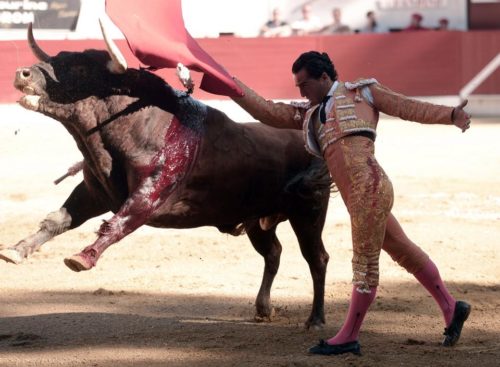 Humane Society spokesman said: “For the thousand bulls brutally killed in French bullfights every year, every single fight is a tragedy in which they have no chance of escaping a protracted and painful death. Blood sports like this should be consigned to the history books. No-one, neither human nor animal, should lose their life for entertainment.”

It is certainly difficult to fathom that in 2017, people are still engaging in a sport that brutally tortures an animal for ‘entertainment.’ Bullfighters know what they are signing up for when they choose that career. In every fight there is a chance that the bullfighter will be severely injured or killed. And for the bull, that chance is 100%. Spectators watch the bull’s blood flow as he dies. They cheer. That cannot be defined as anything but barbaric. Whether it is tradition or not, some traditions don’t need to be carried on. And this is one of them. Civilized people do not revel in blood sport and torture.

In this dangerous sport, sometimes you gore the bull, sometimes the bull gores you. Senor Fandino was tragically bested by his bull opponent, who was injured and killed after the fight. A witness said, “Ivan was caught by surprise and suffered the consequences. People were cheering to begin with, thinking everything was under control.”