Ben Stein has a home up in Sandpoint, Idaho near where I used to live and not far from my family there. I have always liked the guy and agree with him on many things. Yesterday, on Fox News channel’s “Cavuto on Business,” Stein gave an epic smack down to NFL kneelers. He’s an economist and a former presidential speechwriter, as well as an actor and he’s smart as a whip. I almost felt sorry for the idiot he was dressing down… almost. He called the protesters big babies and said we should ignore them. That ‘institutionalized racism’ no longer exists in this country and he’s right. Unfortunately, his opponent on the show does not seem to know what ‘institutionalized’ means. That doesn’t mean that racism no longer exists, it just means it is not seen throughout the NFL and other institutions. It is no longer woven into the fabric of law of this country. As much as the Democrats miss their ‘Jim Crow’, we’ve pretty much gotten rid of it, in spite of the best efforts of Barack Obama.

Stein soundly rejected that NFL players have any justification whatsoever for their pre-game National Anthem protests. He called these spoiled millionaire athletes “a bunch of sulking big babies.” Lol. I just love that and you could tell he solidly meant it. Good for Ben Stein. “You know, these guys are a bunch of sulking big babies,” Stein said. “They don’t know what they’re talking about. There’s no institutional racism at all in America anymore. If they want to do their free speech thing, God bless them. Let them do their free speech thing. But let’s ignore them from then on. Let’s just ignore them like they’re bad babies and we don’t want to hear them crying off in the corner … yes, there’s racism in every human being’s heart. There’s no institutional racism in America anymore. It’s gone.” 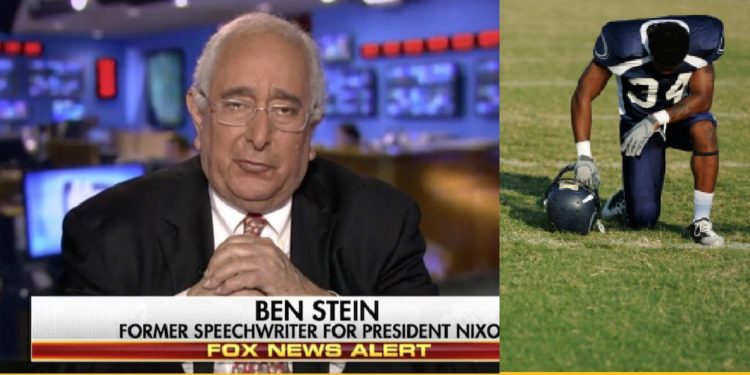 That was an awesome response. And it was spot on. I am sick to death of these racist morons hijacking sporting events and disrespecting America, her flag, the National Anthem, the police, our military and our first responders. It’s beyond getting old. The only thing I disagree with Stein on is ignoring them. Unless of course you consider boycotting the NFL and others as ‘ignoring’ them. Then I’m all for it. Do not reward bad behavior.

If NFL Commissioner Roger Goodell doesn’t have the giblets to force players to honor the flag and country that made them famous and wealthy, then shun the NFL. Only attend and watch games where the National Anthem is respected. If people want to protest, they can do it on their on time and dime. Americans are not victims and do not have to tolerate abuse from these scumbags.

Ben Stein: "These guys are a bunch of sulking big babies… There's no institutional racism in America at all anymore." pic.twitter.com/szJOLkYGf7[2]