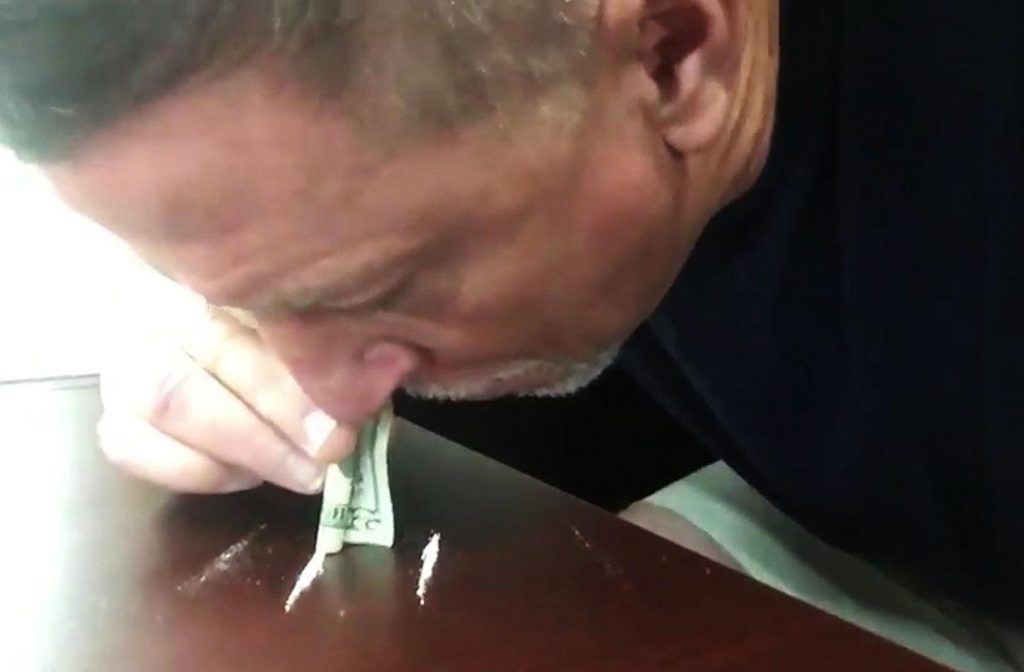 Before snorting three lines of “white powder,” he said “Hey babe, miss you” into the camera and sent the video to his favorite stripper.

The Miami Dolphins are now investigating their offensive line coach Chris Foerster after this video started making the rounds last night. A spokesperson for the Dolphins confirmed that it is definitely Foerster in the video, but told the Miami Herald that they “were just made aware of the video and will have no comment at this time.”

In the video posted below, Foerster snorts three lines of white powder and says quietly:

Hey babe, miss you, thinking about you. How about me going to a meeting and doing this before I go?”

Then he snorts the three lines with a rolled-up bill. We don’t know how old the video is and therefore we do not have confirmation that he was working with the Miami Dolphins at the time.

He then asked the video’s recipient if they think he’s crazy, commenting on how he has his last “little bit” of white powdery substance before going to his meeting. On finishing the lines, he licks the last bit of powder off of his pinky and says, “I wish I was licking this off your p***y.”

Apparently, Chris Foerster recorded the video and sent it to a stripper named Kijuana Nige.

The woman who uploaded the video to Facebook said that Foerster sent it to her to profess “his love” and calls the white substance “blow,” slang for cocaine. In a now-deleted post, this is what she wrote to go along with the video sent to her by Foerster:

“The white people mad at me like I forced blow down this mans nose and like I record it on tha low. No those are his habits and he recorded himself and sent it to be professing his love. So quick to make excuses for him but will roast a minority player over an anthem, dog fights, weed, domestic issues etc. But y’all keep saying ALL LIVES MATTER STFU!!”

Chris Foerster has worked with the Dolphins for the past three seasons including this one. Over 25 seasons with the NFL, he has experience working with the San Francisco 49ers, the Washington Redskins, the Baltimore Ravens, the Indianapolis Colts, the Tampa Bay Buccaneers and the Minnesota Vikings.

It’s probably reasonable to guess he’ll be bumped for going off the rails.

In Florida, the popularity of cocaine was recently overtaken by a synthetic drug from China called flakka that causes a feeling of “super human strength[2].”

Here’s the minute-long video. Contains strong language and drug use.