Broncos Team Gets TERRIBLE NEWS After Kneeling For National Anthem

‘Kneel Gate’ is still exploding in the NFL. Especially after NFL Commissioner Roger Goodell decided that they would not force players to stand during the National Anthem. That’s doubling down on fiscal suicide. The NFL has totally overestimated how important they are to Americans and it could very well bankrupt them. Instead they bowed to a movement created by Colin Kaepernick and Black Lives Matter. They have more concern for militant racists than they do for their fan base. Morons.

The Denver Broncos are in the thick of it as well. With kneeling players and outraged fans, their sponsors are now beginning to dump them. Empty stadiums, plummeting ticket sales and horrid ratings weren’t enough to deter these idiots. But perhaps sponsors fleeing them and pulling their money will help with their viewpoint adjustment. 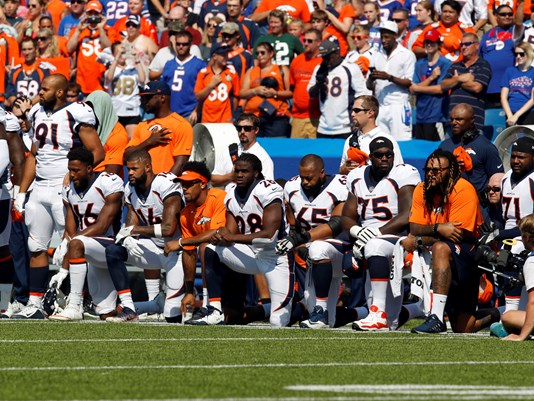 Broncos linebacker Brandon Marshall was at one time a college teammate of Kaepernick and an early kneeling acolyte. Marshall promptly lost some of his personal endorsements. Now the entire team is getting hit over it. Local radio stations are losing advertisers for the slots taken up during the broadcasts of the Broncos games. They might as well have the plague. It’s just that bad. Looking for sympathy… nope, fresh out. “At least two advertisers have asked that their commercials no longer run during KOA‘s radio broadcasts of Denver Broncos games because they’re upset by National Anthem-related demonstrations prior to the kickoff of NFL games. ‘Yeah, there’s been a couple’ that have pulled out, confirms Tim Hager, market manager for iHeartMedia’s Denver stations, including KOA, ‘and that’s the rationale.’” Look for a lot more to follow.

They just don’t get it. It’s not just the fans that won’t stand for the disrespect of America, our flag, our National Anthem, the police, military and first responders. It’s the businesses that keep these teams fat and happy and they’ve had it with them. And it’s not just the Broncos either, this is happening with all of them that are taking a knee. 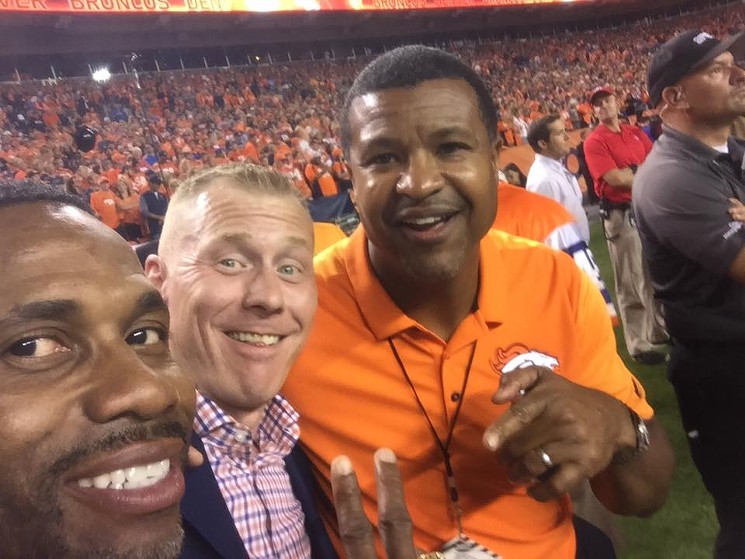 “Controversy bubbled up again last month when teams throughout the league took part in various protests before and during the playing of the anthem — and this time around, there was fallout for Von Miller, the Broncos’ biggest star. Miller’s decision to take a knee, along with dozens of teammates, was followed by reports that Phil Long Dealerships had dropped him as an endorser. Miller’s reps subsequently insisted that his deal with the company had lapsed months earlier and negotiations were ongoing — but a statement from the firm strongly suggested that he shouldn’t hold his breath waiting for a new pact to be signed. It read in part: ‘When we bring in celebrities to represent us, we run the risk of being misinterpreted.’”

Phil Long Dealerships is not willing to trash their reputation because of some unpatriotic sports celebrity. What the celebrity does, reflects on their sponsors. “Hager characterizes [their reasons for pulling their ads] as general displeasure with the NFL over the controversy. In response, he says, ‘we immediately found ways for the advertisers to get their message out and support what they wanted to support. And we’ve also been airing the National Anthem in our game broadcasts, which we didn’t do before this year. So we’ve found ways to strengthen what we’re doing.’” Good for them.

In the end, if enough fans quit watching and enough sponsors dump these teams, they will either be forced to knock it off or go out of business. You should never underestimate the patriotism of Americans or test it for that matter. The whole league is flipping off America and Americans are telling them to go know themselves in the biblical sense.

The Broncos kneeling is bad for business and bad for America. The NFL needs to choose… placate spoiled players or stay in business. Americans aren’t backing down on this one. They’ve already damaged their brand so badly, I don’t know if they will ever recover. Choose wisely guys… because Americans are far more into their country and heroes than they are sports.