Even some liberals don’t get the point of Black Lives Matter types in the NFL performing disrespectful gestures rather than behaving appropriately during the national anthem. To clarify where the players are coming from, let’s turn to Colin Kaepernick, who started the phenomenon:

The Colin Kaepernick Foundation donated in April $25,000 to Assata’s Daughters, a Chicago “direct action” resistance organization honoring Assata Shakur, who escaped prison and fled to Cuba after being found guilty in the 1973 murder of Officer Werner Foerster. …

He has also been shoveling money at

Kaepernick has probably had more influence on the culture of the NFL than any other player, even if this mediocrity is currently without a team. Who else could get owners like Jerry Jones to publicly abase themselves by kneeling before his radical ideology? That ideology consists of pure moonbattery at its most destructive — thus the reverence for Joanne Chesimard, a.k.a. Assata Shakur.

A representative of Assata’s Daughters explains its mission:

“Basically our organization is a part of a much larger movement that is fighting for the abolition of prisons, police and anti-blackness itself.”

The abolition of prisons and police means anarchy, the same dysfunctional form of tyranny favored by Antifa. “Anti-blackness” means “whiteness.” The outfit, like Shakur herself, is as vociferously racist as the Black Panthers, which explains the Black Power fists some NFL players thrust into the air to express their contempt for the Star-Spangled Banner: 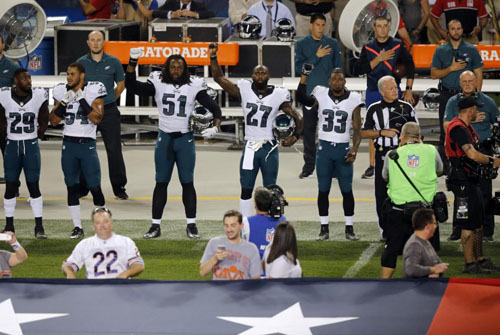 No ideology is more thoroughly malevolent than the one NFL players theatrically kneel in honor of rather than show some modicum of respect for their country and their fans. This same ideology is honored by anyone who still watches the NFL.

On tips from Byron and Torcer. Cross-posted at Moonbattery.