[CRAZY VIDEO] Why Did FURIOUS Dallas Cowboys fan knock out a Philadelphia Eagles In One Blow…?

This is the moment a furious Dallas Cowboys fan knocked out a Philadelphia Eagles fan who later turned out to be his own brother. I guess this guy was a serious fan of Dallas – not that I can blame him, but since I am a native Northwesterner, I hail to the[1] Seahawks[2]: 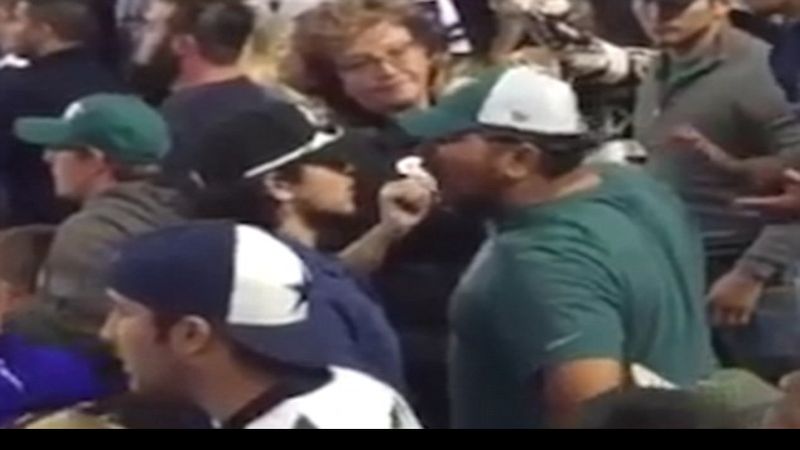 Jorge Castillo threw a single punch at his brother Ignacio, apparently knocking him out cold.

The split-second brawl took place at the AT&T Stadium in Arlington, Texas, where the Eagles beat the Cowboys 33-27 on Sunday.

A third brother, Jose, was also involved in the fight, according to a report on TMZ. It is not clear which team he supports.

The clash was recorded by another spectator, who uploaded the video to YouTube.

Jorge was arrested for misdemeanor assault with bodily injury, and Jose for simple assault and failure to obey police.

Ignacio is set to be booked for felony assault on an officer for allegedly spitting blood at a cop trying to break up the dispute.

The Cowboys-Eagles dispute is one of the most intense in the NFL, with spirited clashes usual whenever the two NFC East teams meet.

The Eagles triumphed in overtime during the latest game.

Both teams were tied on 27 points after four quarters, but a 41-yard pass from Eagles quarterback Sam Bradford to wide receiver Jordan Matthews in the end zone carried the day.

I mean, I guess? Maybe testosterone works differently than estrogen, because I sure couldn’t imagine punching my sister like that. Oh well. Maybe these two shouldn’t attend sporting events where the competing teams are playing in the future.