On June 23, 2002, in a mixed martial arts battle, Don Frye returned to the MMA to face Japanese professional wrestler Yoshihiro Takayama at Pride 21. I enjoy watching fights and have just viewed the outtakes on this video. These two giants – one American, one Japanese – can take punishment as few others can. It is one of the most brutal matches I have ever seen[1]. 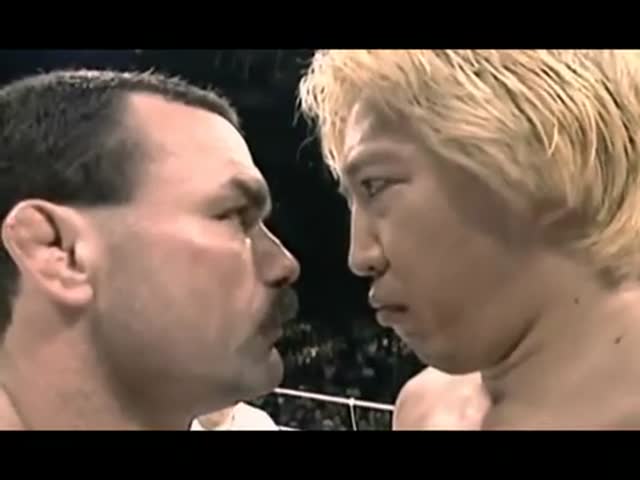 Four months after defeating Ken Shamrock, Frye returned to MMA to face Japanese professional wrestler Yoshihiro Takayama at Pride 21 on June 23, 2002. In a fight that many consider to be one of Pride’s most exciting matches, Frye and Takayama clinched in a hockey fight pose, each holding the head and hitting, with Takayama finally going to the body after more than a full minute of unrelenting, undefended shots. This would happen three times in the fight, until the referee stopped the bout after Frye mounted Takayama, who was visibly much worse for the wear.

In what many PRIDE fans consider to be one of the organizations most exciting matches ever, Takayama faced Don Frye in a slugfest at PRIDE 21, and although he lost the match, Takayama solidified his reputation as one of the toughest Japanese fighters in PRIDE. Also, his battle with Frye appeared at number one on Fox Sports Network’s “Best Damn 50 Beatdowns”.

The fight showed brutal blows from both sides, with Takayama doing body kicks against Frye and Frye raining down hit after hit in return. Takayama outweighs and towers over Frye and never having seen them fight before, I figured Frye was toast. Not so… he beat the holy crap out of Takayama. At the end Takayama’s eyes were swollen shut from a massive, continuous beating and Frye was declared the winner. Takayama took one the most brutal beatings I have ever seen. Watch for yourself: