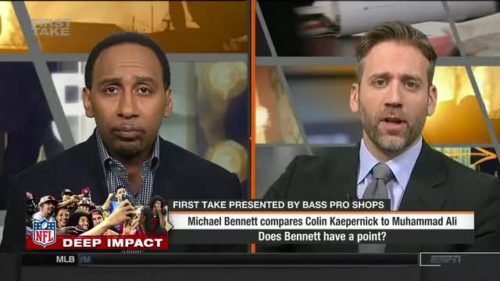 This week on ESPN’s first take, host Max Kellerman[2] left no doubt that he has no idea what constitutes ‘politics’ versus what constitutes patriotism and respect. In a brutally ridiculous comment about Colin Kaepernick, Kellerman characterized the playing of the National Anthem before an NFL game as “injecting politics” into the game.

That is the comment of a man who seems to believe on some level that standing for the National Anthem is only for some Americans, but not all. That somehow paying respect to the flag is a partisan endeavor. Now, it’s quite possible that he comes by this idea honestly. Remember back to the Democrat National Convention in Philadelphia last year before the Presidential election? And there was nary an American flag in sight? Yet at the GOP convention there were flags all over the place? Yes, that’s right, many Democrats and Liberals are ashamed of our flag and of our nation while many Republicans are proud of them. So for Kellerman to associate the flag with partisanship, in some ways, is natural. But that doesn’t mean he’s right. He’s one hundred percent wrong. The American flag represents all Americans, not just one party. It isn’t America’s fault if one party rejects the flag. No one gets to decide the flag is only for some. Not Kaepernick, not Mr. Kellerman.

The Left is always looking to divide Americans into groups. It’s how they see everyone. They see color, political party, economic level, gender. They never see us all as simply Americans, as people. And using that perspective, this guy has decided that the National Anthem is about divisive politics instead of about respecting our nation together.

America is tired of the divisiveness on the Left. It is time to put that behind us and realize we are simply Americans and our National Anthem is for all of us.