Jemele Hill finally managed to get herself suspended at ESPN. Not for calling the President of the United States a white supremacist, mind you. Nope. ESPN had this to say: “Jemele Hill has been suspended for two weeks for a second violation of our social media guidelines. She previously acknowledged letting her colleagues and company down with an impulsive tweet. In the aftermath, all employees were reminded of how individual tweets may reflect negatively on ESPN and that such actions would have consequences. Hence this decision.”

You might ask yourself what Jemele did to bring down the wrath of ESPN on her head… well, she threatened their bottom line. That’s a no-no. She did that by telling people to boycott the advertisers of the Dallas Cowboys. That’s a cash cow for ESPN – they own the rights to Monday Night Football and the ratings for primetime play are always strongest for the Dallas Cowboys. She was suspended for two weeks for that. 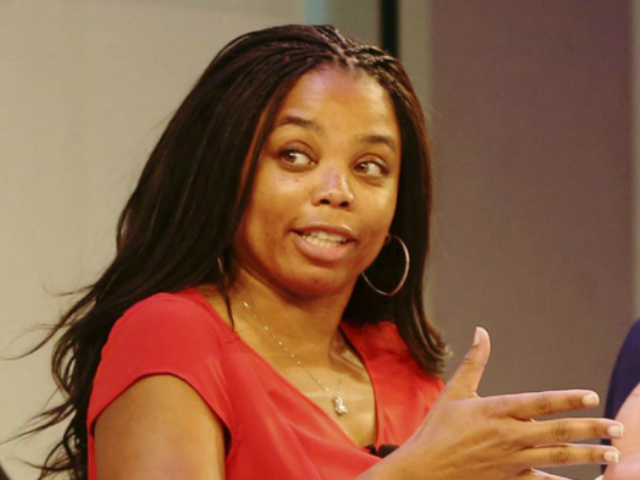 Transparent much ESPN? It’s obvious what matters to them and what line you don’t cross with the network. It took less than 24 hours for her to get suspended over tweeting against the Cowboys. Wonder if she’ll get fired. One can only hope so. She was acting as a political activist for Black Lives Matter again and certainly deserves to get nailed by ESPN for it. I just find it hypocritical when she’s allowed to talk smack to the President on Twitter.

Hill doesn’t like owner Jerry Jones of the Cowboys because he has said no disrespecting of the flag or the National Anthem will be tolerated. That ticked her off. She’s a racist and a radical militant one at that. I don’t care what she does for a living. Hill took to Twitter and released a tweet storm full of advice for those who wish to protest Jones’ decision. Actions have consequences even for reporters for ESPN. Sucks to be her. “Change happens when advertisers are impacted,” Hill wrote. “If you strongly reject what Jerry Jones said, the key is his advertisers.”

No, I think the Cowboy fans — the paying customers — need to pick up this fight. Don't look to Dez or Dak. YOU do it. https://t.co/f9YjZFgGGt[2]

Jones issued a mandate before the Cowboys’ game Sunday against the Green Bay Packers. It came amid a backlash against players “taking a knee” during the National Anthem, driven in part by President Trump’s angry denouncement of what some players say is legitimate social protest. Two of the Cowboys raised their fists towards the end of the National Anthem and that is something Jones won’t tolerate. “I know this, we cannot … in the NFL in any way give the implication that we tolerate disrespecting the flag,” Jones said. “We know that there is a serious debate in this country about those issues, but there is no question in my mind that the National Football League and the Dallas Cowboys are going to stand up for the flag. So we’re clear.” He also said if they couldn’t respect the flag, then the Cowboys wouldn’t play.

Hill, an outspoken liberal, tweeted that Jones “has created a problem for his players, specifically the black ones… If they don’t kneel, some will see them as sellouts.” The ESPN host wrote, “By drawing a line in the sand, Jerry put his players under more scrutiny and threw them under the bus… If the rationale behind JJ’s stance is keeping the fanbase happy, make him see that he is underestimated how all of his fanbase feels.” Guess she found out how ESPN feels about her activism and the Cowboys’ fanbase is happy that ESPN suspended her. Americans cheered her on the way out the door. You can go and stay gone.

Don't ask Dak, Dez & other Cowboys players to protest. A more powerful statement is if you stop watching and buying their merchandise.

If the rationale behind JJ's stance is keeping the fanbase happy, make him see that he is underestimated how all of his fanbase feels https://t.co/45ZDibcWNH[5]

Or, how about not patronizing the advertisers who support the Cowboys? You can watch and do that, right? https://t.co/duPNqxFta7[7]

This play always work. Change happens when advertisers are impacted. If you feel strongly about JJ's statement, boycott his advertisers. https://t.co/LFXJ9YQe74[9]

If you strongly reject what Jerry Jones said, the key is his advertisers. Don't place the burden squarely on the players. https://t.co/Gc48kchkuv[11]