There are evil people everywhere — but there are also heroes everywhere, ready to step in. One such hero is University of Florida linebacker Cristian Garcia. 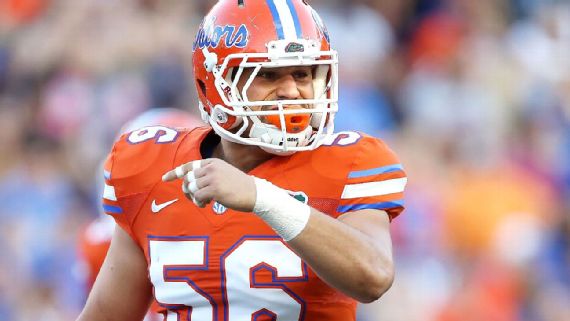 Linebacker for the Florida Gators, Cristian Garcia, witnessed 34-year-old Christopher Shaw raping a 19-year-old unconscious woman while he was taking out the trash at 101 Cantina.

Shaw was captured on video raping the woman behind a trash bin, police said Friday.

Police said Garcia and another witness helped stop the assault.

The Miami-native told First Coast News that he works security behind 101 Cantina and witnessed the assault take place.

When he first spotted the two behind the dumpsters he initially thought they were just having sex.

But once he got closer he noticed the woman was unconscious, according to First Coast News.

‘The girl was basically unconscious, so I knew there was no way she could be giving consent,’ Garcia said.

Garcia told the station that Shaw’s friends had been watching the assault take place and and did nothing to help.

‘I hold strong moral values and I don’t think anyone should be taken advantage of in that kind of way,’ Garcia told the station.

Garcia said he walked up to the man and grabbed his shoulders and told him he needed to stop and Shaw then got violent and threw a few punches.

Shaw was charged with sexual battery and jailed on a $500,000 bond.

‘Upon viewing the videos, it is clear the victim was mentally and physically unable to give consent due to her level of intoxication,’ the police report on the Gainesville attack said.

‘The victim was slumping over and unable to hold up her head. The (defendant) can be seen pushing the victim back up.

‘When pushed back up the victim’s eyes were closed and her head fell back against the dumpster.’

Garcia and another witness told investigators the woman was unable to walk on her own, couldn’t keep her eyes open, and had difficulty speaking, the report said.

When the woman regained consciousness at a hospital several hours later, she told police she didn’t know Shaw and had not consented to sex with him, according to the report.

She also said that at one point she attempted to push him away and told him no ‘but was physically helpless because she was going in and out of consciousness due to her level of intoxication’.

Football players have a reputation as frat-boy types who would happily drug women, but Garcia proves that stereotype isn’t always true. Thank God he was there to stop this animal.