Looks like I wasn’t the only one royally ticked off yesterday as over 200 NFL players knelt during the National Anthem during their games. Many more linked arms. Other teams opted out of the National Anthem altogether. The Pittsburgh Steelers stayed in their locker room… all except one player who was an Army Ranger. And the coach was not happy about him standing in the tunnel for the National Anthem. How did the fans feel about all this? They are furious and they are letting their teams know it. All across the country, former NFL fans are now burning their jerseys and officially boycotting the NFL. Good for them.

The highest number of players to kneel was in Washington before the nationally televised night game, where nearly the entire Oakland Raiders team protested, in addition to six Redskins. No one sat or knelt at the Pittsburgh at Chicago game, although the Steelers stayed in the tunnel. In Tennessee, both the Titans and Seattle Seahawks remained inside through the anthem. This is disrespectful of our flag and our country. Not to mention to all those who fought and died so these morons could play football. Attendance at their games is horrible… viewership on TV is just as bad or worse. And they’ve earned every single bit of it. 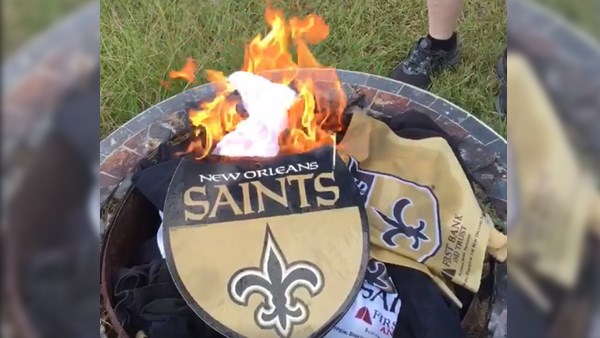 I don’t know how many fans walked out of games yesterday, but I hope it was a lot. That’s what should have happened as these players took a knee. Now, you’ve got leftist celebrities like Alyssa Milano begging her fans to support the NFL. The left hates football. They want to destroy it because it brings Americans together. They’ve pretty much done just that – it’s what communists do. Walking out en masse during a game would bring major TV coverage and would be a powerful statement. We are the only nation in history to go in less than a century from slavery to national anti-discrimination legislation, with criminal penalties for violations. And what do NFL players do to respect that achievement? They give a middle finger to the police and America. What the hell is wrong with these people?

You’ve got players, coaches and entertainers not only linking arms and taking a knee, but using the black power salute. That is homage to militant racism and violent radical revolutionaries. Sure, these players have a right to kneel, but the owners also have a right to fire them. The owner of the Dallas Cowboys came out in support of President Trump’s statement that the bums that kneel on the field should be fired. No one kneels on the Cowboys’ team. Teams were greeted with massive booing on the fields yesterday. The fans are disgusted. All of this isn’t about justice or equality… it’s about hating America.

I'm so sick of pu**y millionaire football players disrespecting ME and my flag!!! I fought for you pricks! Done with the @nfl[2] #TakeTheKnee[3]

After President Trump called for a national boycott of NFL teams that have players who kneel during the National Anthem, football fans began burning NFL jerseys and gear. Protests were everywhere. During the Saints’ game against the Carolina Panthers, 10 Saints players, including running back Adrian Peterson, and safety Kenny Vaccaro, sat on the bench during the National Anthem. One Saints Fan, Denise La Grange Fox, said this was a “very, very sad day” for her, as she threw her Saints memorabilia into a fire pit, doused the jerseys, flags, banners, and signs in lighter fluid, then dropped a struck match on it all. And she was far, far, far from alone. “To the NFL and to you, Tom Benson!” She wrote in a Facebook post. “Together you have ruined and taken the fun out of sports! I’m calling for a burn of all Saints memorabilia!”

Here’s a breakdown at each game, as observed by AP reporters:

— Cleveland Browns at Indianapolis Colts: About 24.

— New York Giants at Philadelphia Eagles: At least three (and three other players raising their fists).

— Denver Broncos at Buffalo Bills: About 35, including Bills RB LeSean McCoy and about half of the Broncos’ roster.

— Pittsburgh Steelers at Chicago Bears: The Steelers stayed in the tunnel, although Army veteran Alejandro Villanueva stood outside the tunnel with his hand over his heart.

In the end, this will bankrupt the NFL and I’m REALLY GOOD WITH THAT. #BoycottNFL

The New Orleans Saints were disgraceful today for kneeling during the National Anthem! They may have won the game but they lost the fan!

LeSean McCoy at end of line doing warmups. Not standing or kneeling. Not at attention. #Bills[8] pic.twitter.com/8EymmYtcPp[9]

LeSean McCoy stretches during the anthem

LeSean McCoy on a big #Bills[8] win and his message to President Trump: "Us Americans are together. Stop trying to divide us." @nflnetwork[17] pic.twitter.com/nUOsaaB3gF[18]

Rico Lavelle just sang the national anthem in Detroit at the Falcons vs Lions game – then took a knee.#TakeTheKnee[3]pic.twitter.com/UrIocvdl0i[20]