Farmer Takes NFL Anthem Protests Into His Own Hands – Sends Them A Message Trump LOVES!

A farmer in North Dakota just scored major points with President Trump. This farmer has made headlines before for his agriculture art, but this time it’s on a subject near and dear for all Americans. Gene Hanson of Edgeley, North Dakota placed a message in his crops for the National Football League: “We stand for the National Anthem.” I love it! He put the message into his bean crops. It’s in response to “Kneel Gate” and the players who take a knee during the National Anthem.

President Trump shared the Fox News article showcasing the farmer’s efforts on his Facebook page yesterday. “Thank you Gene Hanson — a GREAT American (and farmer) who is standing up for our flag, our anthem, and our country!” Trump wrote. Hanson spoke with Fox News yesterday and made it clear he supports President Trump’s position on players standing for the National Anthem. “I go with Trump on this one,” Hanson said. “If you want to protest, that’s not the place to do it.” 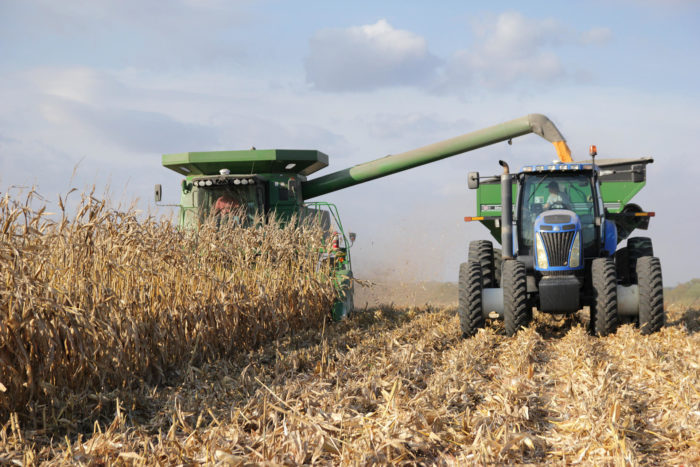 Hanson is a firm believer that if you are going to show respect for anything, it should be for the National Anthem. “A lot of people died over our flag. We’re able to voice our opinion because of it. If you’re going to show respect for anything, do it for the National Anthem,” he stated. Amen to that. After Hansen carved his message into the field, he flew his small plane overhead to capture a picture of it. Then he posted it to Facebook. It was actually his second attempt as he was distracted by a passerby with only two letters to go on the first pass. He relocated to another section of the field and made it perfect.

Hanson had considered adding, “We kneel at the cross” to the bottom of the original message, but the first frost of the season prohibited him from doing so. Yep, it’s that time of the year… winter is on the way. His wife’s name is Darlene and they are devout Lutherans. Hanson is a Republican and a supporter of President Trump. He had the pleasure of seeing Trump in person in North Dakota last month when the President gave a speech on tax reform. “I was 20 feet away from him,” Hanson said. “It was a good meeting and the President stayed on script.”

Hanson firmly believes that Trump is attempting to do the right thing, but the “continuous battle” in Washington, D.C., has made it difficult for him to get things done. He has created other messages in his fields in the past that read, “Drain the Swamp,” “Blue Lives Matter,” “Feel the Bern,” “GOP, get your act together” and “Vote Trump.” I like this guy… he is the very heart of America.