A federal judge in California (where else?) has just ruled in the last week that school districts cannot force football players to stand for the National Anthem. They also can’t force students or coaches to remove hats/helmets or otherwise display traditional forms of respect while the anthem is being played. I so hope that this ruling makes its way to the Supreme Court.

A Native American football player for a San Pasqual Valley unified school district football team, who was identified in court documents as “V.A.,” riled everyone up before a game against rival Mayer High School when he knelt during the playing of the pre-game National Anthem. According to the Los Angeles Times, Mayer fans began shouting racial slurs at him and a San Pasqual Valley cheerleader was doused when some Mayer students sprayed a water bottle at San Pasqual Valley students.

San Pasqual Valley Superintendent Rauna Fox then responded by issuing a set of new rules that prohibited players from engaging in “kneeling, sitting or other forms of political protest” during the playing of the National Anthem. I’m right there with her on that. She also required students and coaches to remove their hats and helmets while the National Anthem was being played out of respect for our country. And of course this led to a lawsuit. Fox said that her decision was out of concern for students’ safety, in light of the unrest created by the protest. The player retained the Glendale, Arizona firm Bush Gottlieb and sued the school district. I would bet that his parents led that assault, not him. 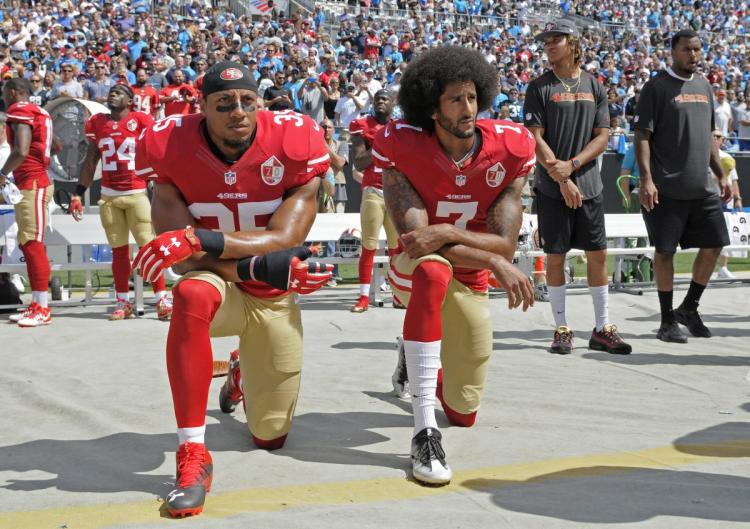 The court has evidently granted a temporary injunction which will let the protests continue for the time being. The injunction means that the court believes that the plaintiffs are likely to succeed on the merits of the case and that the students’ First Amendment rights outweigh the safety concerns identified by the school. These kids don’t have a right to protest during school. They can do it outside of school, but our tax dollars pay for what goes on while they are at said school. This is another reason to homeschool or send your kids to a private school.

This is a public school and where the lawsuit may hold there, in a private school, it would not. The attorneys for V.A. have announced that they will next seek to make the injunction permanent. The school district has not yet commented on the decision, or announced whether it plans to appeal if the injunction becomes permanent. You see what’s happening here? Exactly what Kaepernick intended… chaos and upheaval. He also wanted the destruction of our way of life and patriotism. The liberal courts are allowing it.

San Pasqual Valley High School is 92 per cent Native American or Latino; Mayer High School is 77 per cent white. That really should have no bearing here, but unfortunately it does. I would take my kids off that team and I would not attend the games if this is the way it has to be. In fact, I’d get them out of that school district. This has gone way too far.