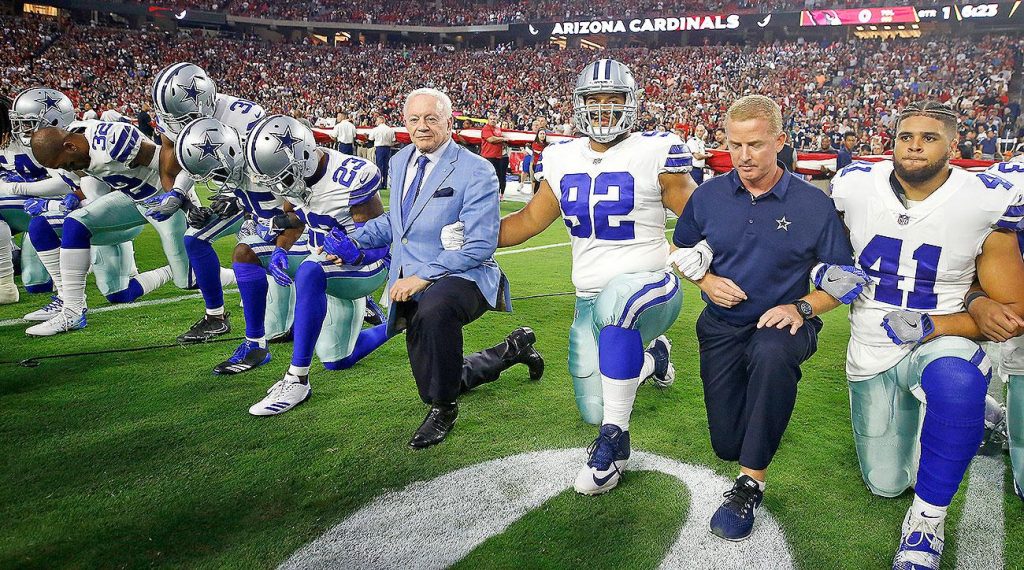 Jerry Jones, owner of the Dallas Cowboys is starting to feel heat for his strongarm position on a contract extension for Roger Goodell, under whose guidance the league has been dropping audience members like autumn leaves.

Last week, Jerry Jones threatened to sue over the contract negotiations for the NFL Commission Roger Goodell, where Goodell is asking for a 20 million dollar bump to making almost $50 million every year, plus a lifetime private jet and a lifetime of health insurance for his family.

According to Mike Florio, whose long columns on Pro Football Talk are usually well-reasoned and bang-on, one of his sources is telling him that “multiple owners” have been discussing what is being called a “nuclear option” from Article VIII in the NFL’s Constitution and Bylaws, which allows for owners to be removed.

Section 8.13 allows the Commissioner of the league to find that an owner can be guilty of “conduct detrimental to the welfare of the League” and that if simply giving a $500,000 fine to the owner is not enough, the Commissioner may bump the issue to the NFL’s Executive Committee who can revoke an entire franchise or force the owner to sell their team.

So, if you step out of line you’re either paying half a million dollars to the league (how else are they going to begin affording Goodell’s new salary?) or you can be forced to sell your team. Since the Cowboys is largely a family affair, with son Stephen and daughter Charlotte both playing roles, Jerry could find an out even then just by selling to his children.

Jon Machota, a co-host of the Candidly Cowboys podcast and the dedicated Cowboys columnist for Dallas News reported that Jones called it “laughable” that he could be forced out of his position:

Machota goes on to say that Jones “doesn’t have [a] replacement for [Roger] Goodell in mind,” and when he was asked about his daughter Charlotte Jones Anderson possibly taking over for the Cowboys, he said that he would support her. In September of this year, Charlotte, the current executive Vice President of the Cowboys said that when Jerry and the team knelt before the anthem, it was a “statement on equality and representation of unity”[4] between the administration and the players and that the players were “adamant about separating that message from the National Anthem.” It’s been weeks since I wrote that article and I still don’t quite understand what she means there.

Having a “nuclear option” sounds like a reasonable idea — hey, if Jerry Jones decided he was going to grow a Hitler mustache and start ranting and raving about identity groups all while saying that football is a sport for little weak-armed girls, then yeah, it’s nice to have the option. But all Jerry is doing is pushing back against Goodell’s secret contract negotiations and pushing back on the kneeling business. That’s good for the NFL.