Colin Kaepernick torpedoed his NFL career after he decided to become a Black Lives Matter activist, refusing to stand for the National Anthem and infuriated Americans across the country. It wasn’t altogether surprising that Kaepernick was let go by the San Francisco 49ers after both his abysmal playing last season, along with his controversial behavior, and it likewise wasn’t surprising that no other team wanted to pick him up. But according to Kaepernick’s friend, he makes fun of racism, sarcastically saying that it wasn’t Kaepernick’s own actions that caused his career suicide — it was racism[1]! 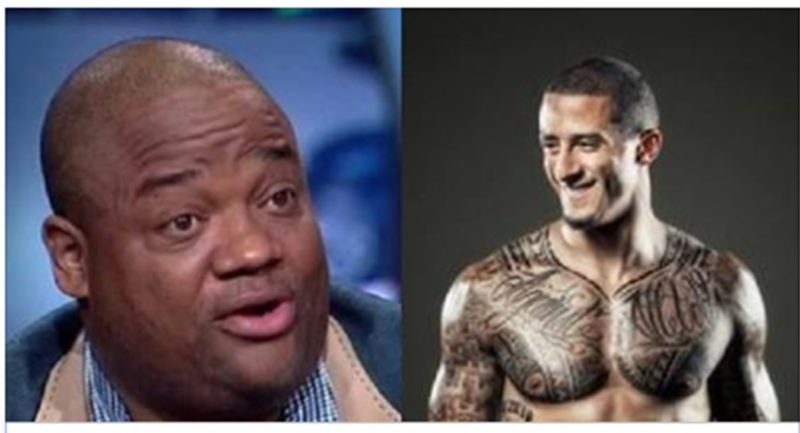 According to Fox Sports analyst Jason Whitlock, Kaepernick’s career ended because ‘allegedly’ NFL owners “hate black people.” He said that the Dallas Cowboys would be the perfect place for Kaepernick to land, because team owner Jerry Jones “voted for Trump and hates black people.”

“Whether you like him or not — and he’s the poster boy for all these alleged conservative bigoted NFL owners who voted for Trump and hate black people — yeah, Jerry Jones, he’s that guy,” Whitlock said. “The guy that gave Greg Hardy a second chance. The guy that stood by Michael Irvin during his playing career and after his playing career and has helped Michael Irvin become a better person and someone who has been able to take care of his family and friends.”

“Jerry Jones the conservative alleged bigot has been tremendous with black athletes,” he continued. “The social justice warrior class won’t tell you these things because they’re lying to you. That all these NFL owners, they’re just so out of control with their bigotry and they hate these black quarterbacks. Jerry Jones who watched his adopted son basically Tony Romo be outplayed and had his job taken by some black kid from Mississippi. Jerry Jones offered not an ounce of complaint. And did the right thing by Dak Prescott, sat Tony Romo on his ass when Jerry in his mind probably thought, ‘We would have a better chance with Tony.’ But he did the right thing.”

Of course, Jason Whitlock’s sarcasm was trying to point out that the real reason Kaepernick doesn’t have a job is because his playing has been terrible and he created a huge firestorm of controversy, not racism. If he had been a good quarterback, some teams might have been willing to overlook the scandal. But a lousy player who attracts tons of negative attention? Who would want that?

Kaepernick’s failed NFL career has nothing to do with racism.