Liberal website: Behind the scenes, NFL Owners are ORDERING Players to Stand for the Anthem 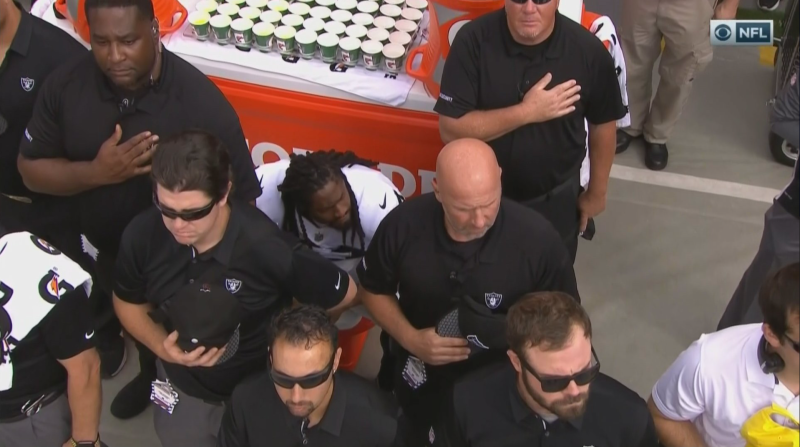 The Root is an online magazine dedicated to “African-American culture” that is owned by Slate and launched in 2008. Slate is in turn owned by the Graham Holdings Company which is chaired by a (not black) guy named Donald E. Graham. Graham Holdings also owned the noted liberal rag the Washington Post before it was sold off to Amazon’s Jeff Bezos.

And, in true liberal fashion, you can’t talk about an ethnic group without complaining about someone else. God forbid writing positive articles.

Anyway, the Root has come out with a new article entitled: “Exclusive: NFL Owners, Coaches Pressuring Players to Stop Kneeling During Anthem.”

It’s an exclusive! Exclusive usually means a one-on-one interview or a unique piece of reporting, so I can’t wait to see what unique opinion or perspective they’re going to give us.

The Root is saying that they have been contacted by eight different people who are either players or coaches in the NFL to tip them off on condition of remaining anonymous. Most of them are saying that “owners, team management or members of the coaching staffs” have told them all to stop kneeling or “have any demonstration during the National Anthem.” Kind of like how it’s been for the last few decades at every football game from the little leagues up to professional.

One linebacker who contacted The Root said the coaching staff “didn’t say what would happen” if they knelt, but “they let us know that we are expected to stand during the anthem.” Is this a shock? Being paid millions of dollars and being forced to stand up straight for two minutes is a shock to you?

Of course, one player said that his coach’s father “served in Desert Storm…[and] fought for our right to take a knee. Then, all of a sudden, he’s asking us not to do it.” They’re blaming management for this. Personally, I’m shocked that they have such an odd understanding of Desert Storm. All this time it was about the right for pro NFL players to take a knee during the anthem.

Last month we wrote up The Root for saying that “Patriotism is for white people[2]” on their Twitter feed. The article that they link to is an opinion piece on white people in America, including gems saying that the American Flag is “drenched in the blood of American Indians and enslaved Africans” and has been further romanticized “as a symbol of guardianship for all citizens of this nation.” Wait, I thought that it was the Confederate Flag that they hated? Stars and Stripes, Stars and Bars, who cares about history, anyway? Not that I think the Confederate Flag is anything beyond a symbol of Southern Pride and maybe some push back against General Sherman.

The Root has been focused on the NFL lately, if you’re wondering who exactly is demanding that NFL players take a knee.

The NFL has discreetly changed its obscure rule about standing during the national anthem https://t.co/yTL8iIIBfz[3] pic.twitter.com/RKXRRJmjO4[4]