Terry Smiley has taken his protests to the skies before. But this time he’s doing it as a former Jacksonville Jaguars fan. He took the NFL boycott to the sky and told the players 1,000 feet below exactly how he felt about the National Anthem protests. His message was simple: “Be American, Boycott The Jags & The NFL.” He says he’s disgusted with the un-American behavior of the players… especially when they took a knee in London last month.

The President of the Jacksonville Jaguars just sent a letter to the city of Jacksonville apologizing for the team’s kneeling during the National Anthem at their Sept. 24th game in London. It’s dated Oct. 6th and says the team was “remiss in not fully comprehending the effect of the National Anthem demonstration on foreign soil has on the men and women who continue to serve out country.” The letter, written by Mark Lamping and addressed to Bill Spann, the Director of Military Affairs for the City of Jacksonville, goes on to say: “today, we can understand how the events in London could have been viewed or misinterpreteted. We owe you an apology and hope you will accept it.” Something tells me that won’t be good enough for Smiley or a whole bunch of their fans. 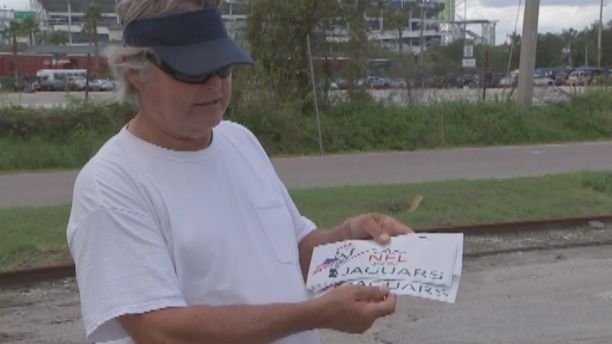 Smiley hired a pilot to fly his banner over the Jags game at EverBank Field this last Sunday. The Jaguars were facing off against the Los Angeles Rams. “I have the right to protest and I’m going to protest it with bumper stickers, airplanes – whatever I got to do. I will continue to protest,” Smiley told WFOX-WJAX-TV. He’s also giving away bumper stickers to get others to join him in his boycott.

“Do you believe in your country? Do you believe in ‘The Star-Spangle Banner’? If you don’t stand up for it now, you won’t have it in the future,” Smiley said. Not everyone agrees with Smiley. Some think it is peaceful protest. Frankly, I think it’s just disgraceful and I think Smiley has the right idea. Some of the Jaguars are STILL kneeling during the National Anthem, apology or not. Fans were angered over the move last weekend. One fan destroyed his Jaguars gear.

Americans are still aggressively boycotting the NFL. They are not watching or attending the games. They are destroying their team merchandise as well. The longer players keep disrespectfully kneeling like this, the worse it will get. There may be some that support the kneeling, but the overwhelming majority are incensed by it. I no longer care whether they realize that they are kneeling for a communist agenda and Black Lives Matter or not. What they honor when they kneel is the hatred of America, our flag, the National Anthem, police officers, the military and first responders. It is evil, militant racism, radicalism and hatred and it should not be tolerated period. 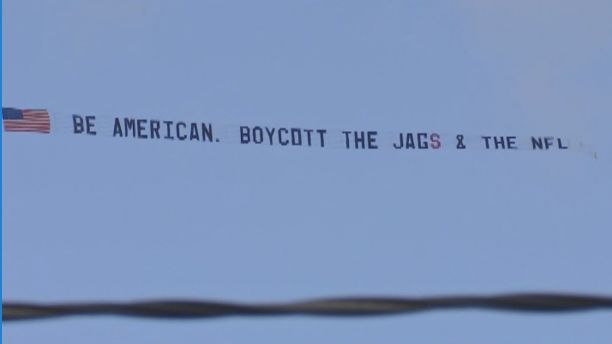 A letter from @Jaguars[3] to #Jacksonville[4] Director of Military Affairs. Re: London kneeling. pic.twitter.com/OqHemw27dY[5]