This is just freaking awesome! While the NFL has knelt during the National Anthem, the MLB has stayed away from that flavor of suicide. Except for one player with the Oakland A’s who then proceeded to pull a gun on a female delivery driver in Arizona. He was suspended for six games. Now, the MLB is showing what true patriotism entails. They made sure the National Anthem during the World Series Game 7 would be one to remember for a long, long time.

Instead of kneeling during the anthem or raising a black power fist, a la Colin Kaepernick, the MLB brought out front and center their Los Angeles Police Department quartet to sing the National Anthem. This right here is one of the main reasons that the ratings for major league baseball are rising. Their numbers are out-performing all other sports right now. They get what patriotism is and how much Americans love police officers. The NFL doesn’t get and I doubt they ever will. Thus bankruptcy is calling. 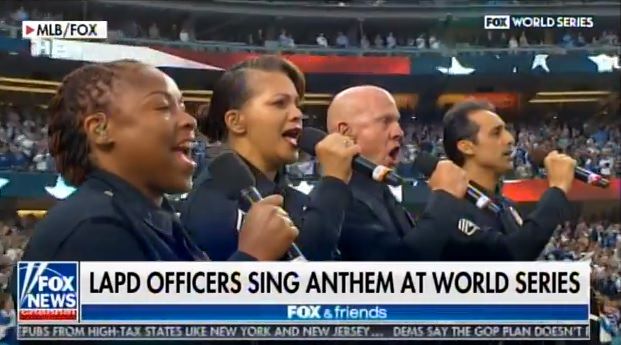 The NFL’s ratings are still cratering and banks are now turning them down for funding. ESPN is considering nixing Monday Night Football, if you can believe it. Dish Network is refunding payments for football viewing and most of America has turned their back on the NFL over their disrespect for the flag, America, the military, police and first responders. But the MLB’s ratings are skyrocketing and people are running towards baseball and away from football.

When the NFL kept up the kneeling and disrespect, fans started walking out and not coming back. They stopped watching them on TV. They burned tickets, jerseys and all kinds of memorabilia. Many stadiums look almost empty during games now. That’s as it should be. Spoiled, entitled millionaires who protest saying how terribly oppressed they are don’t rate high on any American’s viewing list.

Major sponsors are now pulling their advertisements from the NFL. But that’s not the case with the MLB. President Trump is working to get funding pulled for the NFL and their exempt tax status cut as well. No sympathy here. You want to show your hate for America and call our heroes killers and racists? You can get stuffed.

Having police officers sing for the National Anthem was a major slap at the NFL and it left a huge mark. It puts the thugs of the NFL to shame. Tim Talman, Ray Morales, Michelle Ayerdis and Roz Curry, of the Los Angeles Police Department Quartet, gloriously sang the National Anthem and sent a message to all of America… baseball is America’s sport and always has been.

Americans stand for a police officer singing the National Anthem at #WorldSeries[2] pic.twitter.com/UfW8dscpaL[3]

MLB shoving it up NFL’s ass having cops sing National Anthem. Can they be more diametrically opposed?

@realDonaldTrump[8] All standing, hands over hearts, for the National Anthem in game 7 of the World Series, in progressive Los Angeles.