Seriously?[1] New England Patriots Coach Bill Belichick is being chastised for wearing a shirt that some might find offensive. Frankly, I find it funny. The shirt shows a soldier with a gun facing a bearded Islamic terrorist also armed with a gun and he’s being attacked by a combat dog. Then he drops his gun. Yes, I know that Muslims are now up in arms because the figure was depicted wearing a turban. But how is it not true? Terrorism is committed by Islamic extremists. Get over yourselves already.

The picture went viral on social media. The figures on the sleeveless green t-shirt are basically stick figures with x’s for eyes. Under the scene is the phrase: “Life is great.” Cue the politically correct, always offended left. I happen to agree with the shirt and I encourage our military to take out terrorists wherever they find them. The coach was criticized for the shirt by a bunch of leftist, pansy, mush-head snowflakes. If I were him, I’d ignore them… they aren’t worth the bother. 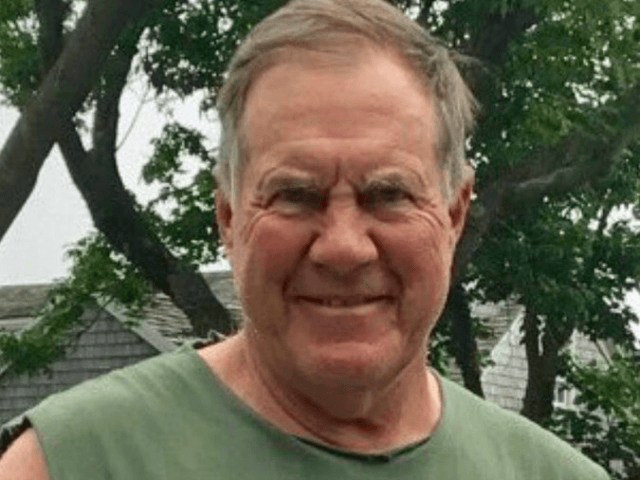 New England Patriots Coach Bill Belichick drew raised eyebrows on Wednesday with his choice of T-shirts when social media users began passing a photo of the coach wearing a shirt that depicts an attack on an armed man wearing a turban.

The photo shows Belichick wearing a green T-shirt with cutoff sleeves. Across the shirt’s front is a crude drawing of a green-clad soldier armed with an automatic weapon and standing smiling, as a yellow dog seems to be attacking a bearded man wearing a turban and dropping his own weapon. The turbaned figure has x’s for eyes, in the cartoon convention for death. Underneath the drawing is the phrase “Life is great.”

The photo brought mixed reactions, but many criticized the coach for his shirt.

Of course one leftist, Tariq Nasheed, had to say that it reminded him of a police dog mauling a black man. This time I’m sure I speak for all of us when I say, huh? It’s obviously not a police dog or a cop. And what does being black have to do with being a murderous terrorist? Sounds to me like Nasheed is the one being racist here and thunderously stupid at the same time.

The Boston Herald called Belichick a “true patriot,” but Vice Sports called the shirt “offensive.” Of course he’s a Patriot… he’s their coach. I know, bad pun. But he’s also a real American patriot and he’s not some sissified metro-sexual liberal in a romper either. The shirt came from Trident K9, a company that sells police and military equipment for K9 units. So, that money went for a very good cause. Again, the left will hate that.

“If you are a military K-9 handler, then life is great! Celebrate the end of Osama Bin Laden with this T-shirt,” the store website reads on its page selling the shirt. Even better! This depicts a Navy SEAL offing bin Laden. Nice. I may have to get one myself. And let’s give credit to the brave service dogs used in combat… they save a lot of lives and help take down a lot of bad guys.

Coach Belichick is know for ardently supporting our military. This picture is believed to have been taken while he was vacationing on Nantucket Island.

This is a very interesting shirt that Patriots GM Bill Belichick has on. It reminds me of that video of a police dog mauling a Black man pic.twitter.com/7TpJeq2ThR[3]