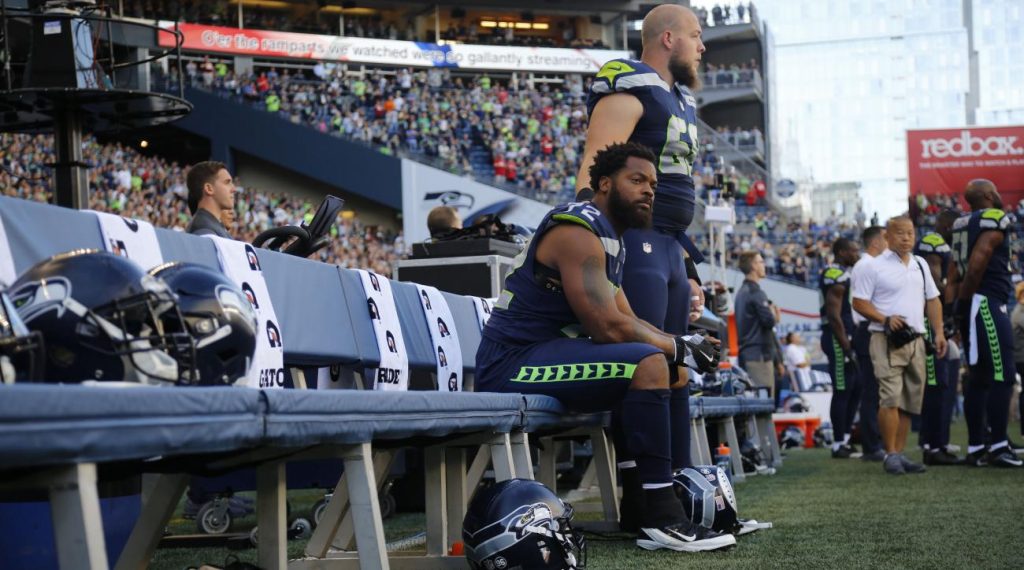 The National Football League is teaming up with its Players Association to have heartfelt talks about the anthem, kneeling and whether they should dedicate an entire month to activism awareness.

In a press release, the NFL and the NFL Players Association (NFLPA) gave a joint statement saying that they held a meeting recently which included league and union officials as well as team owners and players.

This meeting took place a month after four players wrote to Roger Goodell that asked the league for “support, collaboration and partnerships” in order to achieve their stated goal of “strengthening the community.” “Strengthening the Community, as we know, is a nonsense phrase that makes no sense when you remember that football players are just doing a job. A well paid, celebrity job, but a job nonetheless. Their letter included another request: for the NFL to start an activism awareness month.

So far, the NHL has been completely clean of this nonsense if you want to watch a sport that isn’t rotted from the inside by communist millionaires.

Here are the players who wrote to Goodell:

The 49ers are famous for being the first refuge of Colin Kaepernick, who started off this whole idiotic kneeling during the anthem business.

The Seahawks have been awful too, with one of their players Michael Bennett, flashing a Black Power salute[2] after sacking a player on the other team. Bennett has been sitting out the anthem too,[3] if you had any doubt.

So, it’s these four geniuses from their genius teams who think that being disrespectful race-baiters is a reasonable response to false stats on the races of people who are killed by cops who are hassling the NFL for an Activism Awareness Month.

The only reason they can get away with all this is that the civil rights activists from the 50s and 60s are dying off and are less able to raise their voices in protest of these ridiculous schemes. And with the NFL losing viewers every hour, there won’t even be anyone left in the stands to watch.