The NFL is in deep trouble and it’s just getting worse with each passing week. Most of their games over the weekend had more empty seats in stadiums than fans cheering them on. And it wasn’t just the National Anthem protests in the mix. There were fights, scuffles and bad football to contend with. It’s exactly the opposite of what the NFL needs right now. Over a dozen football players continued their protests over the weekend in their first test since the Thanksgiving holiday. The protests and the boycott both continue. And it’s destroying the NFL.

The pictures of the stadiums on the Internet tell the tale… thousands of empty seats are glaringly apparent in these stadiums. It’s a death knell for the NFL and the idiocy of it is that it could be stopped and reversed easily. But NFL Commissioner Roger Goodell refuses to do his damn job. At least ten teams protested this weekend… in effect giving their fans and America the bird. It set Twitter on fire. 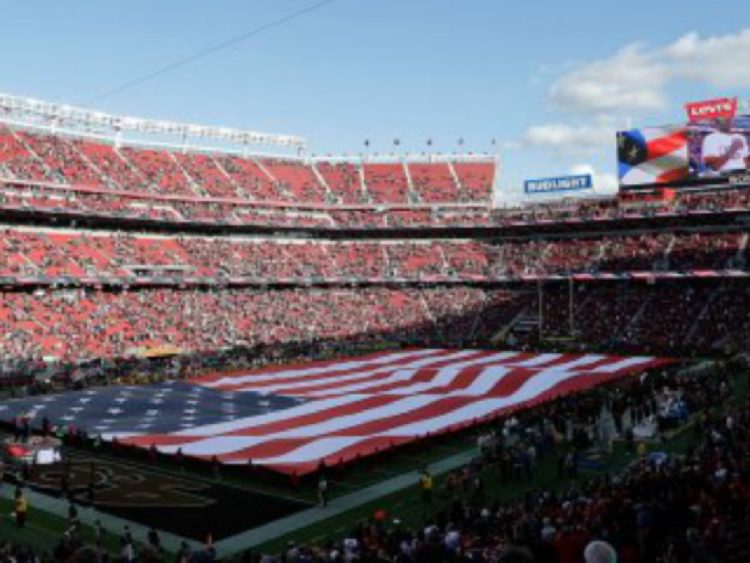 The San Francisco 49ers, who infamously had Colin Kaepernick on their team at the beginning of all this, played at home and lost to the Seattle Seahawks. Their players were more interested in making it all about them than playing football. The Indianapolis Colts did not fare any better and they had just as many empty seats as they lost 20-16 to the Tennessee Titans. In New Jersey, as the Carolina Panthers beat the New York Jets 35-27, fans avoided MetLife stadium and only checked from home to see the outcome. Most people didn’t bother as very few even watched football this weekend. Cable ratings are still swirling the bowl.

The Cleveland Browns suffered a loss to their in-state rivals, the Cincinnati Bengals. There were literally thousands of empty seats at Paul Brown Stadium in Cincinnati. At the Mercedes-Benz Stadium in Atlanta, the Falcons stomped the Tampa Bay Buccaneers 34-20. Instead of cheering fans, the cameras panned empty seats and kneeling players. The Buffalo Bills won against the Kansas City Chiefs at home 16-10, but did so in front of a tsunami of empty red stadium seats. This was the norm in stadiums, not the exception this weekend.

While the Denver Broncos took on the Oakland Raiders, a fight broke out among the players. The chaos that ensued saw three players ejected for their unprofessional behavior. What a freaking circus. Then there were the protests. Eagles safeties Rodney McLeod and Malcolm Jenkins raised their fists in protest. Dolphins players Kenny stills, Julius Thomas and Michael Thomas, knelt prior to taking on the Patriots. While Chiefs cornerback Marcus Peters and Titans wide receiver Rishard Matthews stayed off the field until the anthem was over. And during all this the ratings tanked massively.

What we are watching is the painful end of the NFL brand. It’s a train wreck and it will lead to bankruptcy. But that’s what happens when you let a minority of players take over your message and don’t discipline them for it. The NFL has earned this and no one will miss them all that much.

And more from Indy #TENvsIND[7] RT @OllieNanyes[8]: Titans at Colts. Lots of empties at Lucas. @[me] pic.twitter.com/9qvEVaaZNj[9]