Something about this story stinks to high heaven. Peyton Manning is now being accused of sexual assault… from 20 years ago. Jamie Naughright, an athletic trainer at the University of Tennessee, gave an interview to a salivating “Inside Edition.” She claims the incident happened in 1996. “The reason why I’m here today is due to the courage and bravery that the women have come forward with the Harvey Weinstein, the survivors and the victims. And that is really what has brought me here today to discuss that issue. [Manning] pulled his shorts down and put his anus and testicles on my face.” Not buying it.

Manning for his part claims that he was mooning a friend in the locker room. “I briefly pulled down my pants to so-called ‘moon’ him. One second, one-and-a-half seconds. Pulled my pants back up and continued with Jamie’s examination of the bottom of my foot.” Naturally, Naughright called Manning a liar. She claimed she was scared and intimidated by him. “It was definitely a predator — intimidating, anger, violent eyes that he had.” Naughright said she filed a report and “feared for her job, worried and feared for her life.” Oh, come on! He assaulted you with his eyes?! 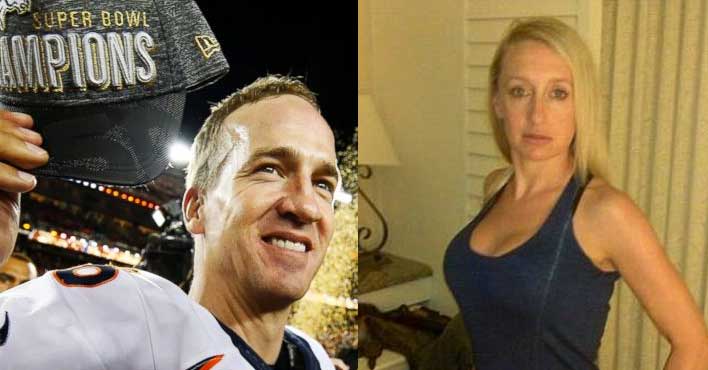 “My boss, when I called him that night, really realized that this was a serious situation. This was a sexual assault and he informed me not to call the police or press.” Sure he did. Naughright was ultimately awarded a $300,000 settlement after she filed an “employment complaint” and then she resigned shortly after. Sounds like the university paid her to go away and she took it.

Matthew D. McGill, Manning’s lawyer, released a statement to “Inside Edition” following the interview: “Peyton Manning has been absolutely clear: Jamie Naughright’s accusations are false. When her claims were first investigated 21 years ago, she told a very different story. Her current account was invented several years later in connection with her first of several groundless litigations against Peyton. Most recently, she left Peyton’s mother a vulgar and extremely disturbing voicemail. Ms. Naughright should stop this abusive behavior.”

Jamie Naughright talked with @InsideEdition[2] anchor @DeborahNorville[3]. Norville joins us at the table in Studio 57: pic.twitter.com/UZIr0njwje[4]

Honestly, this woman sounds nuts to me. Naughright said in response to Manning’s statement that she has not changed her story, but did not deny that she called Manning’s mother. “I’m on Ambien. And I had sleptwalk and somehow found that number, Naughright told Inside Edition. “And anger and Ambien is not a good combination.” This woman sounds psychotic to me. Color me extremely doubtful that what Manning did was anything more than a prank on a friend and that this woman is trying to cash in on it over and over again. Again, not buying it.

An ex-trainer says she received death threats in connection with sex assault claims she made against Peyton Manning. https://t.co/0VqoeaBGzB[6] pic.twitter.com/VZ6njUmn9Y[7]