The official twitter of Papa John’s issued a three tweet apology about the comments made by the CEO of the company, John Schnatter. Papa John had previously blamed the protests from the NFL players for its low sales during the season so far. I think maybe it’s because the food is gross. 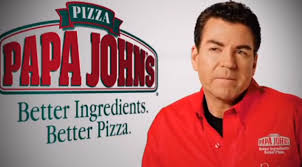 The Louisville based company did a complete 180 and is the latest in a long line of kowtowing fools.

Do I have a right to protest the “better ingredients” claim they’ve put out over the years? Their pizza is gross, no wonder people aren’t buying it anymore.

Schnatter unleashed his fury during an earnings call, suggesting kneeling players were to blame for the poor sales. He also lambasted league officials for not putting the controversy to bed.

“Leadership starts at the top, and this is an example of poor leadership,” Schnatter said. “The NFL has hurt Papa John’s shareholders. This should have been nipped in the bud a year and a half ago. The controversy is polarizing the customer, polarizing the country.”

He should have stuck to his guns. Instead, he is facing the ire of conservative types, who love to get political over the National Anthem.

“The statements made on our earnings call were describing the factors that impact our business and we sincerely apologize to anyone that thought they were divisive. That was definitely not our intention,” Papa John’s tweeted.

“We believe in the right to protest inequality and support the players’ movement to create a platform for change. We also believe, as Americans, we should honor our anthem. There should be a way to do both.”

“We will work with the players and league to find a positive way forward. Open to ideas from all. Except neo-nazis.”

A Twitter follower asked if Schnatter had anything to do with the post, the middle finger emoji included.

Yikes. I don’t care who you are, neo-nazi money is as good as anyone else’s. Or is this the time we talk about not wanting to make food for someone[4] you disagree with? Maybe this is why your sales are going down. Instead of prostrating yourselves to the yuppie types, who don’t eat pizza, and are the only ones who care Colin Kaepernick is not in the NFL, why don’t you stay out of politics altogether and make beaucoup profits? The NFL is a sinking ship[5] right now. You should think about getting off of it.