President Trump literally eviscerated the one player who knelt during the National Anthem on Thanksgiving. In fact, not one player knelt for the two days prior to Thanksgiving either. On those days, the Minnesota Vikings defeated the Detroit Lions and the Los Angeles Chargers won against the Dallas Cowboys. The jerk who knelt was none other than New York Giants defensive end Olivier Vernon. What an asshat. The Giants played against the Washington Redskins last night. Not only did he kneel, he did it while a member of the armed services sang the National Anthem. Totally disrespectful and absolutely disgraceful.

Vernon just had to kneel protesting what he sees as racial injustice and persecution by police officers. All of that is bunk and Americans are sick of it. One dumbass has to ruin Thanksgiving… a day many look forward to for football. Not this year. Most people didn’t bother to turn it on and if they did, they turned it off as this guy knelt while a Master Sergeant of the United States Army sang the anthem. He tried to make it all about race and himself. It’s the very antithesis of what Thanksgiving stands for. 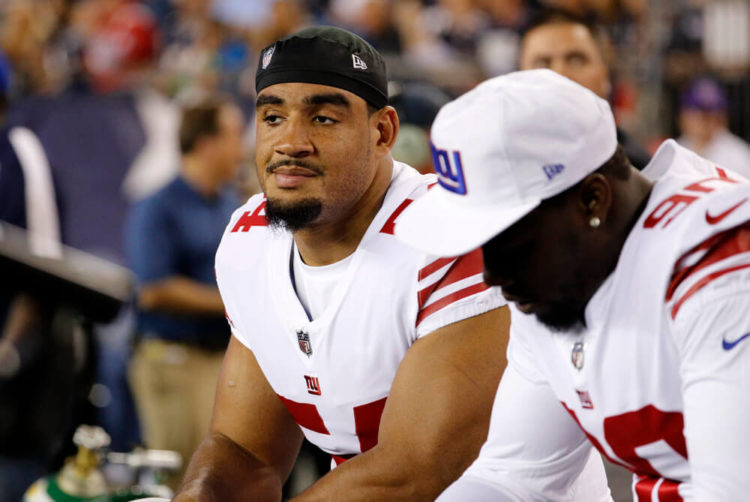 The number of players kneeling during the National Anthem has dwindled considerably, but there are still those who just won’t give it a rest. If it does not stop altogether, word has it the NFL will go back to its pre-2009 policy and have teams stay in the locker room until after the National Anthem is played. I still find that cowardly, but anything would be better than the disrespect these players are showing. President Trump has come out very strongly against these players kneeling. And so has America in general. President Trump was clear on the issue of remaining in the locker room, “That’s almost as bad as kneeling! When will the highly paid Commissioner finally get tough and smart? This issue is killing your league!” True that.

Vernon, whose father was a Miami police officer for 25 years, is one of the few remaining players to continue protesting the anthem. “What it would take for me to stand is if people can understand what the whole message is behind it,” Vernon told Newsday recently on why he continues to protest. “That would actually help a whole lot, but everybody doesn’t see things that way and tries to distort what the message was from the beginning, which is basically social injustice on African-Americans and police brutality.” I guess he is one of the few who truly knows why he is kneeling, but it’s still a lie and it stills bows to Black Lives Matter and black nationalism.

Giants defensive end Olivier Vernon kneels on Thanksgiving night. Vernon's father is a retired police officer, and he's been kneeling for the anthem since Trump's comments in September. pic.twitter.com/zxrepNbg1W[2]

Vernon also pulled this stunt on Veterans Day, so it’s no surprise he did it on Thanksgiving. I’m sure a lot of people didn’t even bother watching yesterday. I know I didn’t. They’ve ruined the sport for me. Thanks a lot, you idiots. And I’m not alone. The NFL is on the verge of bankruptcy and so is ESPN. They did it to themselves. Americans will always choose their country over football. ALWAYS.

On #Thanksgiving[4] dude? While the Anthem is sung by a Master Sergeant of the United States Army to honor the United States of America ? Disgusting and dispicable. Turning off the game #NFL[5] pic.twitter.com/LtzvPm4Yt4[6]