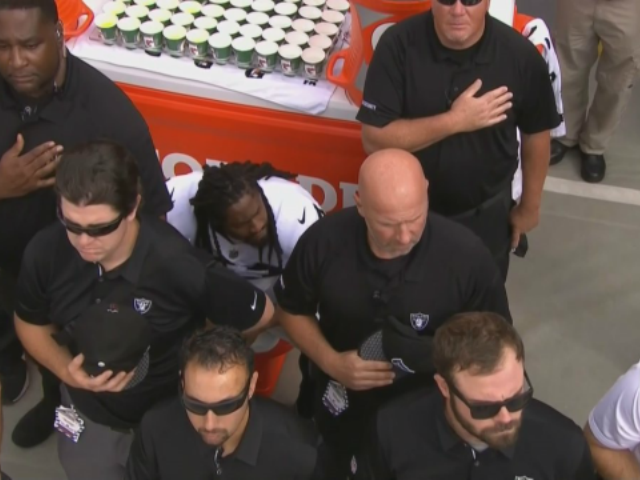 We know that television networks from cable to the Sunday Ticket are going far out of their way to cover up the audience reaction to the league-killing backlash against the disrespect and shenanigans going on to do with both the flag and the National Anthem. The teams are losing audience members in the stands and viewers at home, as their longtime fans are burning their jerseys and cancelling their subscription packages[2].

The Raiders have been getting attention lately for their rotten attitude as well as the possibility that they’re throwing the game to punish members of the team who have continued to stand for the anthem.

A few days ago, we reported on the conservative radio show Armstrong & Getty and their analysis of a recent game against the Redskins where they brought up a few instances that made it look like the Raiders may have thrown the game. By comparing quarterback Derek Carr’s last season to this one game, they pointed out that last season Derek wasn’t sacked, but in this one game he was sacked four times by the Redskins who had broken through the Raiders’ offensive line.[3] As well, the Raiders center snapped the ball back too early three times. They are a professional team and shouldn’t be making these kinds of mistakes.

Now it looks like the Raiders are attempting a literal cover-up of running back Marshawn Lynch, who is being surrounded by administration and officials standing for the anthem while he sits it out. The above image is from right before a game against the Broncos and posted by Sports Blog Nation.

Raiders and Broncos sidelines during the national anthem pic.twitter.com/Gon8DUDXpG[4]

Before the game, Marshawn was photographed wearing a shirt that said “Everybody vs Trump” on his t-shirt.

I’m spoiled by watching professional hockey. Every NHL player arrived to games wearing suits. If the players aren’t going to push themselves into acting more respectfully, they’re just going to burn through their audience members at an even faster rate until it negatively impacts their salaries.

Back in August, former Raider Tim Brown went after Marshawn Lynch[8], saying that it brought negativity to this “incredibly positive situation.” He said “[These protesting players] are trying to be a part of this world but football is where people go to get away from all of that stuff.” He would not commit to saying that it was nothing but a distraction to the team, but Brown did say that Lynch was either there to represent himself, or he’s there to work with the Raiders to win a football game.