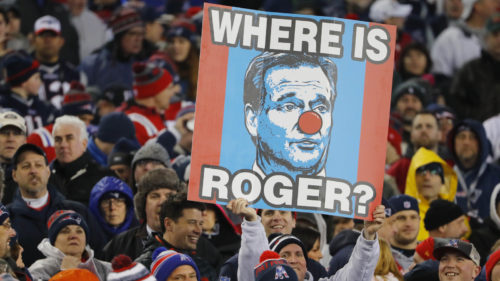 Roger Goodell is hoping that team NFL pays big bucks to keep him. The NFL Commissioner currently makes 30 million a year. He’s asking for 50 million, plus a lifetime private jet, to stay. This incredibly arrogant move comes on the heels of his utterly disgraceful handling of league business for the past two years.

Goodell has made notoriously poor decisions with regard to player discipline over the years. But the most egregious example of his complete lack of leadership lies in how he has handled, or rather NOT handled, the anthem “protests” staged by the league’s millionaire crybabies before the game over the past two years. 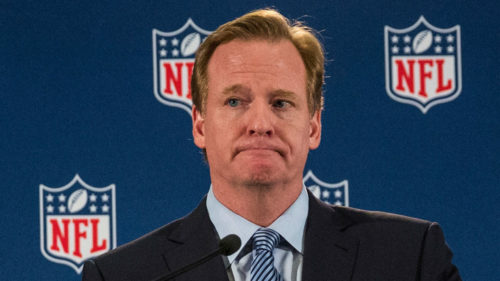 The players involved in being disrespectful of the anthem and the flag are claiming it’s meant to highlight racial injustice. But that assertion falls flat when the facts are considered. Consider these salient points; the player rosters are 75% African American, the league owners pay millions and millions of dollars to African Americans, the league has been a major promoter of African Americans for decades. So, to protest racial injustice by punishing the very league that’s getting it right is incredibly shortsighted and foolish.

The protests have damaged the NFL’s brand among consumers. The NFL was the most popular and wealthiest sports entity in the United States. Then players started being rude during the anthem by taking a knee instead of standing hand over heart with respect. This behavior was absolutely unchecked and ignored by Roger Goodell for months and months. The NFL then began losing advertisers, viewers and ticket sales. Many stadiums had a slew of empty seats during games. All because the Commissioner couldn’t see fit to hold the players to a standard of respect for our nation and our flag, as well as for those who have shed their blood defending this nation. The very people who have sacrificed everything to keep us free, made possible the careers of these whiners. And the thanks they get is to take a knee.

Americans are sick of millionaires with chips on their shoulders. Time to grow up and be professional. They get paid to play football, not to waste our time with protests. By all means, speak out…on your own time and on your own dime. Use that platform of fame to go out and speak, work and give toward whatever cause you want. But when you are at work, get up off the ground and show some respect for America, the land where dreams come true, YOUR dreams of becoming an NFL player. Every kid in America would switch places with you. How about you all show gratitude for what you have and grow up.

NFL fans called for a Veterans Day weekend NFL boycott to stand in solidarity with the Veterans being disrespected by the protesting players. Interestingly, few if any players took a knee this weekend. Maybe they are wising up and seeing the advertiser and fan money being drained out of the NFL because of their actions. Maybe now that their own paychecks might be on the line, they are showing respect. We will see next weekend if it sticks.

But the fact remains that Goodell’s poor leadership during this crisis not only doesn’t merit a 20 million pay raise, it should get him booted out. Make him a free agent. He’s earned it. Hire someone for half the money and twice the spine. The NFL needs leadership. And Goodell isn’t it.