In Virginia, high school football players were banned from pregame prayers. Prior to the game between West Virginia’s Clay County and Braxton County last week, the teams took a knee to pray anyway. They bowed their heads in prayer. The ban just recently took place. It came after banning prayers over the loudspeaker at the games. One person complained about the pregame prayers and the school was quick to institute a ban on the display of faith.

“We had a request last year toward the end of football season to check into whether [prayer] was taking place and if so was it allowed?” Clay County Superintendent Joe Paxton told WSAZ. They cited a Supreme Court ruling that bans school-sponsored prayer in public schools. But I don’t see how a team saying a prayer before a game is sponsored by the school, do you? Instead, the school ordered a moment of silence. 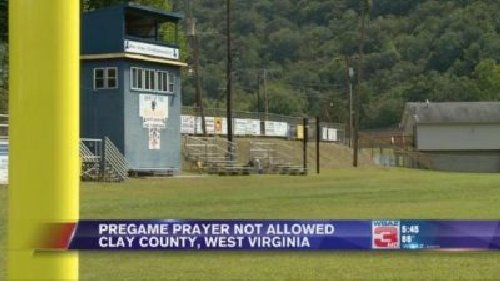 In direct defiance of the ban, both teams rushed the field and knelt together in prayer during the moment of silence. Some of the people in the stands also bowed their heads in prayer. The game was on September 1st. “As a school and a school system, we are going to abide by the law,” Clay County High School Principal Crystal Gibson told the media. “If anyone wishes to pray, I, by all means, wish that they would. That’s their right to do so,” she said. Not only that, Gibson also added, “I’ll being doing so at the same time. Most of the community, I do believe, supports prayer,” she explained.

Several fans wore shirts that said, “I’m gonna pray anyway.” Dani Ramsey lost her son to cancer in 2009 at the age of 16. He played for Braxton County. She said, “these teams are local rivals in a big way.” Even so, “they chose to stand together for the right to pray.” Dani said that the communities there both support prayer. “A number of folks in both communities would never back down on these issues,” said Ramsey, who runs a local community center in Rosedale, West Virginia.

Christians “in both counties take coaching opportunities for the purpose of being a testimony and pouring into the kids,” she said. “Personally, I believe that concept has planted seeds in the kids’ hearts for years.” That explains why the students and the fans are refusing to back down here. Unlike the school, they don’t cave to one intolerant bully it would seem. Good for them.