Fox Sports 1’s Shannon Sharpe, co-host of “Undisputed,” stated that he thinks Alejandro Villanueva was wrong to stand out on the field for the National Anthem while the rest of his team stayed in the locker room.

Now before you fly into a rage, hear him out. I’m sure he has a perfectly reasonable reason for thinking that standing for the National Anthem is wrong just because other people wearing the same shirt as you are not doing it. 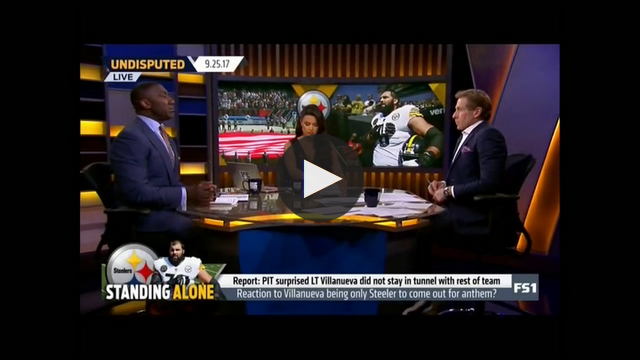 “I believe he was wrong in this situation,” said Sharpe. “I believe he put his personal feelings and beliefs in front of that of the team.”

Oh brother, a former Army Ranger stood for the National Anthem before a football game and it hurt the feelings of his teammates. Well, stop the presses, let’s get them all blankies and nightlights.

I think Sharpe is misunderstanding what millions of people are saying. It’s not about the team, it’s about respect for the flag and who has it versus who doesn’t. We’re all willing to listen to your views as long as you voice them in a way that is respectful and open-minded, because we will help you come up with solutions. But when you do something that is seen as disrespecting the country that has made you rich and famous and successful, a lot of people shut off mentally and view you as a traitor who hates America.

Alejandro did what he thought he had to do, as his service taught him and the rest of his team did what they thought they had to do. It’s unfortunate that people like Sharpe can’t understand this, because it’s not about race, or injustice or social issues for millions of Americans, it’s about respect. If you can’t respect us, then we see no reason to respect you or what you have to say.