The Pittsburgh Steelers are facing the worst public relations crisis of their long career and they are in serious damage control mode.

Alejandro Villanueva made the rest of the team look like disrespectful jerkbags when he was the only player to stand for the National Anthem on Sunday and since then, the team has been trying desperately to save face.

One of the ways they’re attempting to do this is by sending out letters to fans (current and former) to try to explain the situation and make it look less ugly in the morning light. 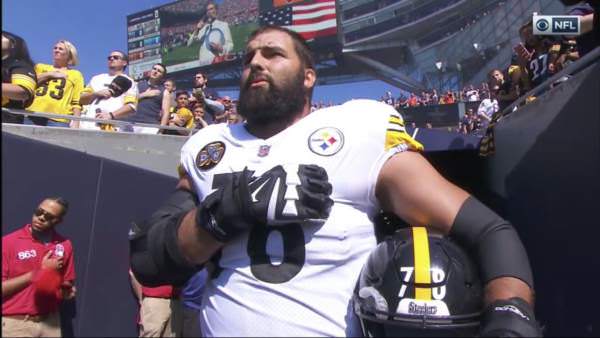 Perhaps they were spurred into action after videos of their fans burning their Steelers paraphernalia got national attention.

Art Rooney II sent out a plea to those who have supported the Steelers for years, attempting to correct what he called a “misperception” about the reason the players stayed in the locker room during the National Anthem.

“The intentions of Steelers players were to stay out of the business of making political statements by not taking the field. Unfortunately, that was interpreted as a boycott of the anthem – which was never our players’ intention,” the statement began.

What he doesn’t understand is that we live in a time where perception is reality. In their opinion, these people view what the players are doing as disrespectful to the anthem and the country. If you believe people can choose what gender they are based on how they “feel,” then you are in no position to render their opinions on the “protests” invalid. Sure, that may not have been the intention, but when has intent ever stopped liberals from ranting, raving and rioting?

“Our players come from many different backgrounds and are united by what it means to play for the Pittsburgh Steelers,” he continued. “They are active in their communities and participate regularly in events designed to give back to those communities. And they appreciate the support they get from Steelers fans around the country and here at home.”

“Yesterday, I received an email from a Steelers fan who said tell the players to just play football,” he noted. “That is exactly what they wanted to do. They wanted their sole focus to be on playing the game, while also coming together as a unified team.”

“The main thing we can do is learn from this and strive to come together remaining unified as a football team,” he concluded. “I believe we are capable of accomplishing this with the support of our fans. Steelers Nation is made up of the best fans in the National Football League. We appreciate your continued support of our players, coaches and staff.”

I don’t think they have nearly as much support as they think they do.