Steelers Tackle Rolls Back Patriotic Move: ‘That Picture Of Me Standing To Nat’l Anthem Is Embarrassing’

Well, this is disappointing. I would imagine there are going to be an awful lot of football fans burning and returning #78 jerseys after this. Alejandro Villanueva, the Steelers tackle who chose to stand for the National Anthem while the rest of his team stayed inside the tunnel, has had a change of heart. He now claims that he intended to stay with his team in the tunnel and that standing for the National Anthem was ‘unintentional’. It’s sad to see an Army Ranger bend to team peer pressure and strong arming by his coach. But whatever. “Unfortunately I threw my teammates under the bus, unintentionally. Every single time I see that picture of me standing by myself I feel embarrassed.” And we are embarrassed that we cheered you, so I guess we are even.

Villanueva’s explanation over all this is that he had requested to stand in front of the team with the captains. For some reason, he did not stop when he got to the front of the tunnel and instead, walked out in full view of the fans and the cameras. He also defended his coach, Mike Tomlin, who was criticized over all this and was also critical over Villanueva standing for the anthem. The Ranger and three tour Afghan veteran said, “For anybody who thinks Coach Tomlin is not as patriotic as you can get in America, I’m offended by that.” Again, we are offended by all of you, so we are even-stevens. 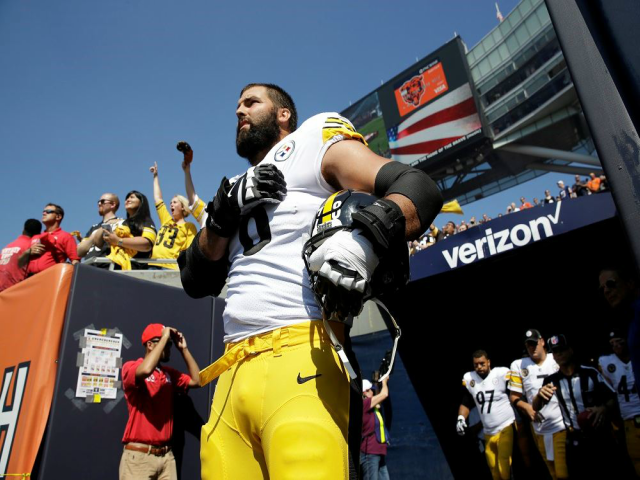 Most of America today after Villanueva’s apology are shouting, “What the hell for?” His jersey became the hottest selling one in the league yesterday and now just as fast, it’s going to plummet. I’m done with all of them. There’s at least one player on the Steelers team with a conscience. Steelers quarterback Ben Roethlisberger wrote on his personal website, that he wasn’t able to sleep Sunday night. Consumed by the idea that that the Steelers should have not handled the anthem protest the way they did. Saying that it presented a disorganized and inconsistent front. Roethlisberger says he wished the Steelers had, “approached it differently.”

Alejandro Villanueva, who stood alone during the National Anthem, now says he regrets his actions. pic.twitter.com/yXolZdp2tW[2]

Now that I’ve said all that, I want to make a point here. Did you know, according to LawNewz.com, that before 2009, the teams were not on the field for the National Anthem? They came out afterwards. This changed in 2009 when the Department of Defense and the National Guard started paying NFL teams to play and stand for the National Anthem. That should be stopped immediately – it’s called propaganda. Either they play it because it’s the American and right thing to do, or they don’t. It turns out that from 2011-2014, the Department of Defense spent $5.4 million in contracts with 14 NFL teams for flag ceremonies. The National Guard got in on the action too and gave $6.7 million to the NFL for the same kind of thing from 2013 to 2015.

The owners of the teams are also totally culpable in all of this. They prevent their members from honoring dead police officers or 9/11. But they are all in for Black Lives Matter and militant racists making a statement. That’s enough of that crap. If you can’t honor the country who made you great and wealthy and not get paid for it, there is something seriously wrong with you. If Americans had noticed all of this back in 2009, there would have been a huge backlash. It took a bunch of cop-hating racists to wake us up and bring this into the light. Thank you… you just did all of us a favor. #BoycottNFL