VIDEO: This boxer knocked out his opponent & won a championship on Saturday & his reaction is AMAZING

The bat flip has definitely come to the fight game.

Not long ago we brought you the story of Mark Hunt, who won a UFC heavyweight bout over Frank Mir with a huge right hand, and proceeded to saunter off with a shrug of his shoulders[1] while the referee started his count. 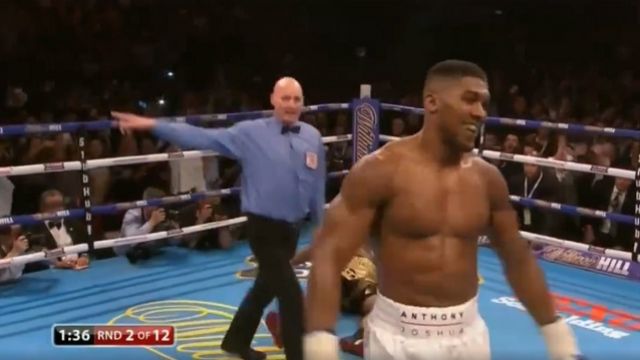 It turns out Hunt wasn’t the only fighter with a flair for the nonchalant. Anthony Joshua, who earned himself the IBF heavyweight title with a knockout of Charles Martin[3] and may have even out bat-flipped Hunt.

The secret to a good bat flip is to make it look effortless. And you can’t do a much better job of that than Joshua did…

ANTHONY JOSHUA KNOCKS OUT CHARLES MARTIN AND IS THE NEW IBF HEAVYWEIGHT CHAMPION OF THE WORLD! pic.twitter.com/oGfcBAiBTu[4]

Joshua might actually be the athlete who brings boxing, which especially at the heavyweight level has been on the wane since Mike Tyson bit Evander Holyfield’s ear off, back to respectability. He’s not only an excellent boxer, he’s got some style to him – and that’s something the sport desperately needs.