Don’t Mess With Texas. That age old adage was on display during the halftime show of the Alamo Bowl in San Antonio, Texas. Stanford University has no mascot because anything it chooses will be considered offensive to someone; they are political correctness personified. They came rolling into town to support their team in the Alamo Bowl against Texas Christian University. And boy did it get wild. 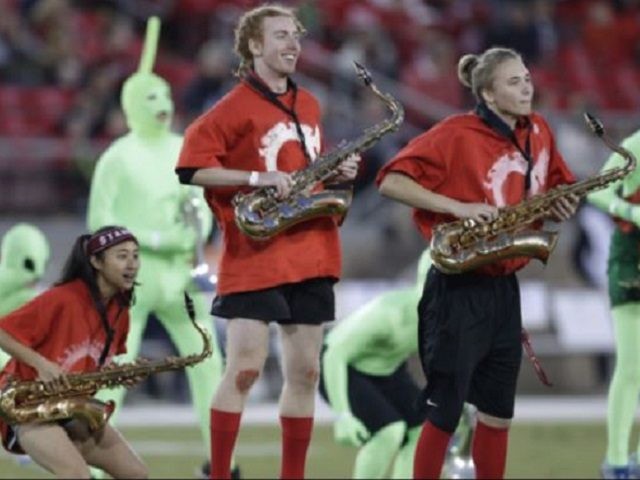 Deep in the heart of Texas, the fruitcakes from the Bay area mocked all things sacred to Texans: the border wall, Whataburger, and Texas pride. The Stanford band is known for poking fun during its performances, but this one may have gone too far. Audience members booed the band very loudly and deservedly so.

The band opened the show claiming the entire show was sponsored by the White House Press Office and named it “Texas: Too Big to Fail?” The band quickly assembled the words “Fake” and “News.” Yikes, the level of self awareness does not run very high with these people.

The show’s announcer read some “fun facts” such as “Texas is really, really, small,” and that Texans rank last in state pride. It sounds like a third grader wrote it. Well to be fair, most college kids act like third graders nowadays so, kind of hard to decipher.

The announcer then said, “If you tried to build a fifty-foot wall along the entire southern border, the cost of it could only pay for the tuition of about 20 million college students.” The boos quickly began to ramp up. They then took a shot at the sacred cow of Texas: Whataburger. They had the audacity to call it “Waterburger, a food chain that apparently only serves water.”

Whataburger responded with a tweet. “Maybe if the Stanford band had some Whataburger they wouldn’t be so unhappy.” Class act Whataburger, class act.

Trying to score free food out of the exchange, the degenerates from out West responded.

Give us some coupons and we’ll give it a try! We’ll try anything once ????

After the band mocked the TCU horned frog mascot, the football team got fired up and came from behind to win the game 39-37.