Bannon To Anthem Kneelers: They Should Take A Knee Daily And Pray To Thank God Trump Is President

I’m not a big fan of Steve Bannon. I never have been. We have different political philosophies and some of the things he says and does make me cringe. Bannon had this to say on Sean Hannity’s show last night, “If people in this country take a knee and the national football league players want to take a knee, they should take a knee at night, every night, and thank God in heaven Donald J. Trump is president of the United States,” Bannon told Fox News. “He has saved this country so much grief. He has done such a tremendous job with virtually no help,” Bannon continued.

We should be thankful for our country and our President. We should all get down on our knees and thank God for our blessings. But making it seem as if Trump is the savior of the nation is going just a wee bit far for me. In this same talk, Bannon accused the left of economic crimes against Americans. That I can agree with, but it wasn’t just the left, the right had a big hand in it too. I’m not a rah, rah type of person for politicians. Bannon is still working for Trump even though he’s no longer in the White House. Poking the political hornet’s nest of the NFL and telling them they should be grateful for Trump will probably only stir them up even more. Which I’m okay with… just don’t tell everyone that Trump is all that Americans should be thankful for. 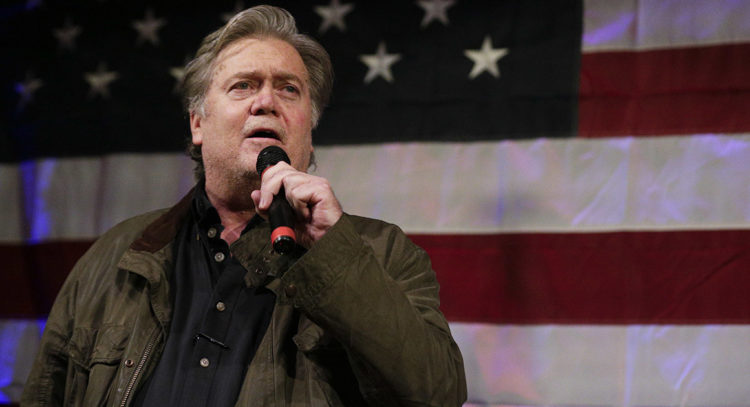 As President Trump’s battle with the NFL stretches into a fifth day, he has taken to attacking their ratings. Which in my book, is fair game. Trump is urging the NFL to create a rule to force players not to take a knee during the National Anthem. “The only way out for them is to set a rule that you can’t kneel during our National Anthem!” Trump tweeted. On that, I would agree and since the teams are privately owned, the owners could do that if they so chose. But remember, these are the guys that would not allow any form of honoring or remembrance of fallen officers or 9/11. So, I kind of doubt they’ll do it.

I agree with Steve Bannon that it is inappropriate to kneel during the National Anthem. He’s exactly right on that. I also agree with him on supporting Judge Roy Moore over Sen. Luther Strange (R-AL). Bannon is a smart man and although we don’t see eye to eye on a number of issues to a great extent, he gets a lot of things right. One thing I like about Bannon is he gives elitists major heartburn. “The elites hold me in contempt. I wear their contempt as a badge of honor,” Bannon said. And so he should.

The NFL has all sorts of rules and regulations. The only way out for them is to set a rule that you can't kneel during our National Anthem!