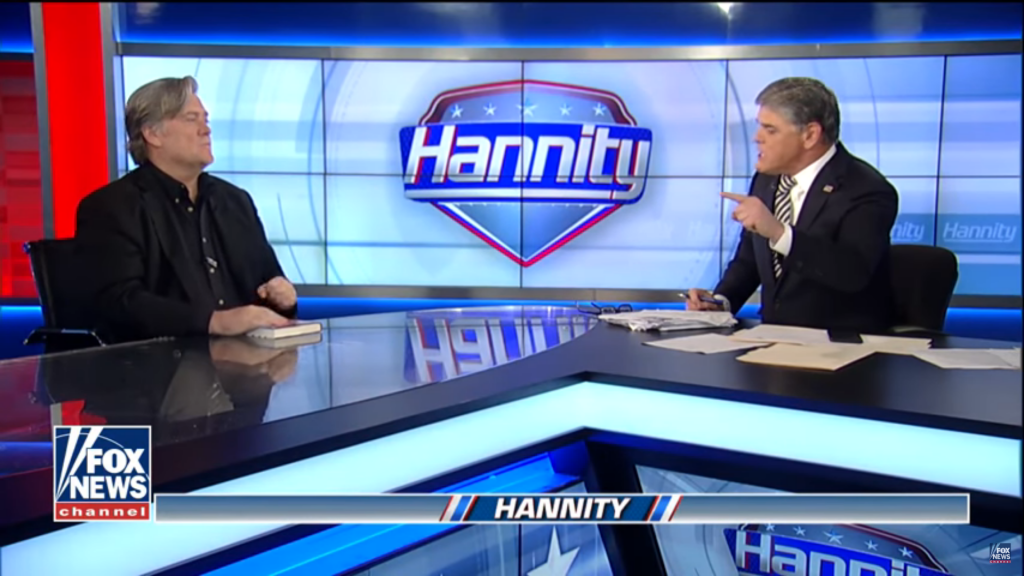 A few years ago, Andrew Breitbart, the founder of the site who died in 2012 said of the left: “You’re going to call us racist, you’re going to call us potential Timothy McVeighs? F**k you,” before saying WAR! into the camera. Breitbart’s call for #War has been a long time in the making and Bannon is continuing on that thread.

And on this appearance, Bannon wastes very little time before talking about war. Hannity opens by saying that, “The Senate hasn’t done a thing, Steve! Nothing!”

Bannon said that, “In a time of war, we have troops in Afghanistan, in the North West Pacific and Korea… it could be like World War 1. In the South China Sea, in the Persian Gulf, we have American lives at risk every day.” He goes on to say that Senator Bob Corker’s tweet:

It's a shame the White House has become an adult day care center. Someone obviously missed their shift this morning.

…calling the White House an “adult day care center” is “totally unacceptable.” Saying that only “two or three Senators” on Capitol Hill “have Trump’s back” and explains why there’s been no real change in Obamacare or in tax reform, or any of the issues on which Trump won the election.

“If Bob Corker had any honor or decency, he should resign immediately.”

Going further on this notion, Bannon said that major donors are telling him that they’re “tired of having their money burned up” by the candidates and that in order for citizens to take their country back, they must cut off the oxygen (meaning the money) to the major figureheads like Mitch McConnell. “There’s no magic wand we can wave and drain the swamp,” but working to remove their unhappy donors is a start.

This tweet encourages Bannon’s notion to challenge every single Republican seat (except for Ted Cruz) and was even retweeted by former friend of Andrew’s, Lee Stranahan.

On his last appearance on Hannity on September 25th, Bannon spoke about the NFL anthem controversy. He had no patience for the kneelers and said if “the NFL players want to take a knee, they should take a knee at night, every night and thank God in heaven [that] Donald J. Trump is the president of the United States,[4],” saying that Trump has saved America “so much grief” and has done a “tremendous job” despite having “virtually no help.”

I’ve skipped forward to 1:30 minutes into the video to get to where Hannity introduces Bannon. You can watch here: