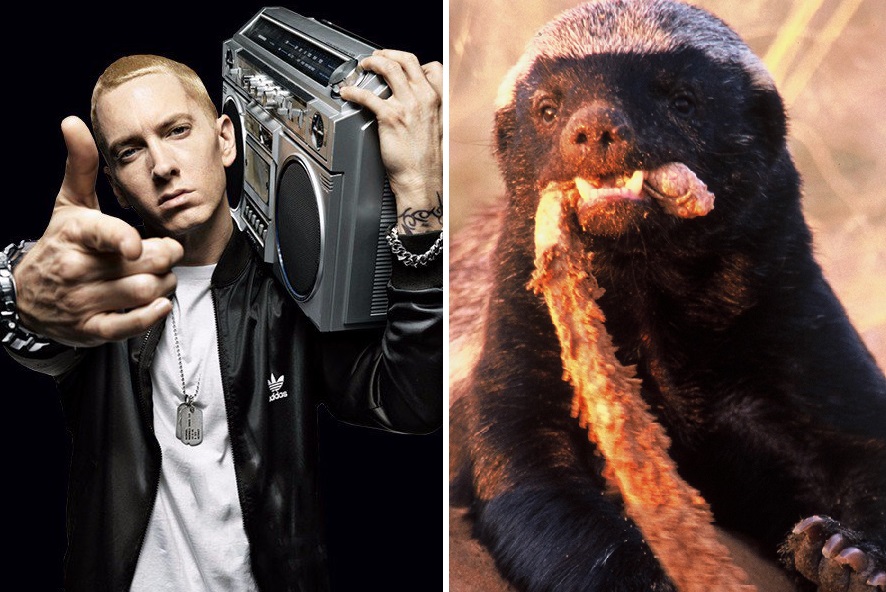 Forty-four year-old rapper Eminem, real name Marshall Mathers, released the world’s lamest diss track the other day that among other targets, attacked the guy who runs Breitbart. Steve Bannon spent a few months as a White House strategist with Trump before moving back into the private world as a media editor for the late Andrew Breitbart’s magazine and has exactly zero patience for being insulted via hip hop.

In 2011, a viral video about honey badgers emerged and now has well over 84 million views. The narrator talks about the small animal native to Africa, southwest Asia and the Indian subcontinent using footage from National Geographic. Honey badgers are more closely related to weasels than badgers and weigh between 11 and 35 pounds and are extremely tough, able to survive arrows, spears and machete attacks as well as other wild animals. The video, posted below, gave us the pop culture phrase: “Honey badger don’t care.”

The response took place in an interview with Joshua Green from Bloomberg.

I asked Bannon to respond to Eminem calling him out at @BET[2] Awards: "On the record: Honey badger don't give a shit" https://t.co/SN5QrmyLs3[3]

Green just released a book called Devil’s Bargain: Steve Bannon, Donald Trump, and the Storming of the Presidency. I’m sure that it’s flattering towards Bannon due to being granted an interview, so I can see why Bannon would choose Green’s interview to use such an attention-grabbing phrase. Not to say that Green isn’t a capable writer, but I do think that it’s suspicious that Bannon would be filtering a great response through any reporter who wasn’t affiliated with Breitbart.

In a video released during the Black Entertainment Television Hip Hop Awards, the white Eminem showed up in a video to complain about Trump and tiki torches. He also mentions the Ku Klux Klan, despite it being an institution aligned with the Democrat Party, not the Republicans. So, hip hop probably isn’t the best place to get political information from.

Earlier today we wrote about Benghazi survivor Kris Paronto, who called Marshall Mathers “candy rapper m&m[5]” (one point lost for not calling him a candy wrapper) in a long Instagram post. Paronto said that the only bigotry and racism he’s seen in the NFL protests are the “kneelers and their supporters.” Wearing an American flag shirt in his selfie, Paronto said that if he wants advice on “how to commit domestic abuse, live in excess, disrespect the masses as well as lessons on ungratefulness I’ll listen to m&m and the NFL players.”