According to Chuck-you Schumer[1], the Democrats have locked in enough votes to filibuster and block Supreme Court nominee, Judge Neil Gorsuch. Mitch McConnell has vowed that Gorsuch will be confirmed this week to the bench and I believe him. The Nuclear Option cometh. The Republicans will indeed use it on Gorsuch and on the next nominee and the Democrats have only themselves to blame for this. Schumer has vowed along with other Democrats to block Gorsuch no matter the cost. Well, they will get their wish this week. I hope they choke on it.

Schumer has been demanding that Gorsuch be replaced with a moderate who the Democrats would like. That’s never ever going to happen. Nobody wants to use the Nuclear Option, but there is no choice left for the Republicans here. The Democrats have blocked and obstructed the Trump administration at every turn and that’s enough. McConnell will do it and this time I support him all the way. 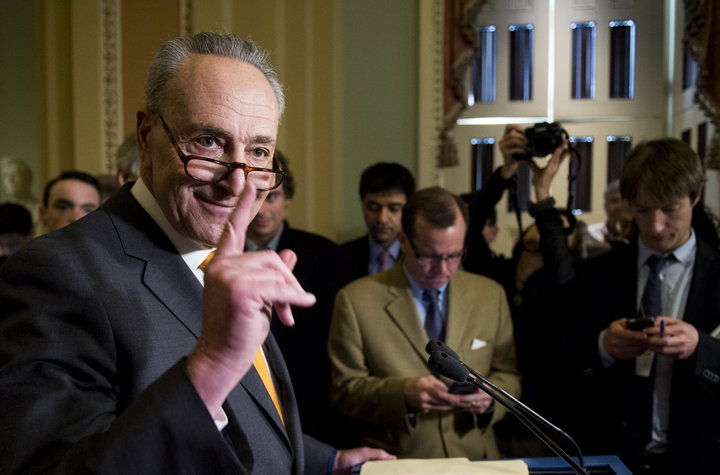 WASHINGTON ― Democrats have locked in the votes to block Supreme Court nominee Neil Gorsuch, meaning Republicans will have to take the extreme step of blowing up Senate rules to confirm him.

Democratic lawmakers have been vowing for weeks to deny a vote to President Donald Trump’s court pick, and have been inching closer to the 41 members they need to filibuster him. They hit the magic number on Monday when Sen. Chris Coons (D-Del.) announced he will join the blockade.

“I will be voting against cloture,” Coons said, using technical terms to mean he will join the Democratic filibuster, “unless we are able, as a body, to finally sit down and find a way to … ensure the process to fill the next vacancy on the court is not a narrowly partisan process.”

The news means Republicans have a choice: cave to Democrats’ demands that Trump put forward a different nominee (highly unlikely) or unilaterally change the rules so they can confirm Gorsuch without Democrats (likely). It currently takes 60 votes to advance a Supreme Court nominee. Republicans appear ready to use a procedural maneuver to lower that threshold to 51 votes.

If the Republicans do this, it could mean that the filibuster in the Senate will be done away with altogether. “It makes me very sad,” Sen. John McCain (R-AZ) said last week. Both sides have really brought this on, but the left has made it explosive. The Dems are still butt hurt over Obama’s Supreme Court nominee, Merrick Garland, not being allowed a hearing. But that was nothing out of the ordinary and Obama knew it. He was trying to force that through when outgoing presidents rarely do such a thing. The Republicans want their own pick which only makes sense. But the Dems are throwing a tantrum. It’s a good thing the adults are in control.

Democrats are also under intense pressure from their base to stop Gorsuch. Republicans are furious that Dems are forcing them into this. This will create an even worse rift in the Senate if that is even possible. Gorsuch appears on track for his procedural vote, the “cloture” vote that Democrats plan to filibuster, on Thursday. Trust me on this… Gorsuch will be seated on the High Court by the end of the week. Let’s go nuclear.