Whoa… the Texas Supreme Court[1] yesterday ruled that gay couples do not have a right to government-funded spousal benefits. The court is made up of nine Republicans, so you can imagine the screeching that ensued. But I will just say this… Texas recognizes marriage as between a man and a woman, so why wouldn’t they rule this way? It was a unanimous vote. The US Supreme Court may have legalized same-sex marriage, but the individual states have not.

Conservatives are thrilled and see this as a protection of traditional marriage. In the end, this will be a stand-off between the federal government and the states over this issue. Of course, GLAAD was all over this: “The Texas Supreme Court’s decision this morning is a warning shot to all LGBTQ Americans that the war on marriage equality is ever-evolving, and anti-LGBTQ activists will do anything possible to discriminate against our families,” said Sarah Kate Ellis, president of the LGBT advocacy group GLAAD. So, the battle lines are drawn in Texas. Nothing new here. 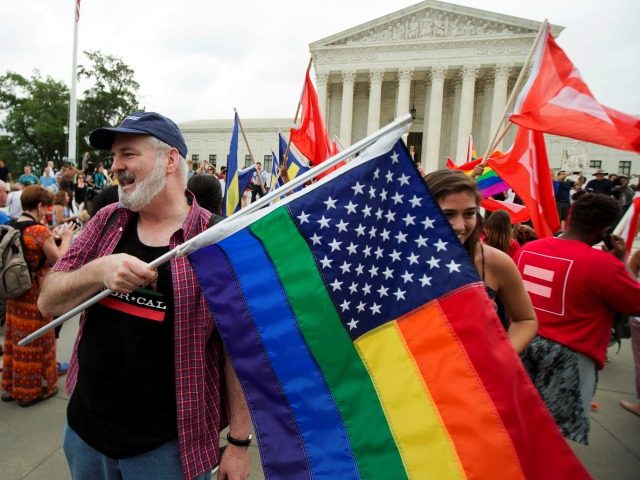 The all-Republican nine-member court ruled that while the U.S. Supreme Court in 2015 legalized same-sex marriage in Obergefell v. Hodges, the “reach and ramifications[3]” of the rights of gay couples are still up in the air.

The nation’s highest court legalized same-sex marriage, but did not detail what additional rights are guaranteed to such couples, according to the Texas court.

This all started over a case in 2013, where then-Houston Mayor Annise Parker, the city’s first openly gay mayor, was sued by two local taxpayers for her decision to grant government-subsidized spousal benefits to gay couples who were married in other states. The two taxpayers were a pastor and a CPA. They sued Parker and argued that no city employees had a “fundamental right” to receive government-funded spousal benefits and that it was “perfectly constitutional” to grant benefits to traditionally married couples and deny them to same-sex couples.

The case went nowhere and after the US Supreme Court made their ruling, Texas began paying out spousal benefits to same-sex couples. Conservatives, however, did not give up. Pressure by Texas Gov. Greg Abbott, Lt. Gov. Dan Patrick and Attorney General Ken Paxton led the state’s Supreme Court to re-hear the case in March. This now sends the case back to the Harris County district court. They will have to determine whether the city of Houston is required to provide spousal benefits to same-sex couples. Supporters of gay marriage vow to appeal the ruling.