BREAKING: Gorsuch is IN! [VIDEO]

Judge Neil Gorsuch[1] has officially been confirmed as the next US Supreme Court Justice! That is terrific news and a real feather in President Trump’s cap. Vice President Mike Pence presided as the Senate voted 54-45 in favor of Gorsuch, a 49 year-old veteran of the 10th U.S. Circuit of Appeals in Denver whose rulings make him an intellectual heir to the late Justice Antonin Scalia, whose seat he will fill. It is said that Gorsuch is to the right of Scalia and to the left of Thomas. I’ll take it… he is a constitutional conservative and an originalist. Just what we need for the High Court and exactly what Trump promised.

51 Republicans and three Democrats voted for Gorsuch. Chuck-you Schumer must be throwing a tantrum somewhere right now. Joe Manchin of West Virginia, Heidi Heitkamp of North Dakota and Joe Donnelly of Indiana joined with the Republicans to vote on Gorsuch’s qualifications, not on politics. Good for them. This is also a win for Mitch McConnell… he kept a hearing for Obama’s choice right at the end of his term from occurring. I contend that was the right thing to do and I am thrilled with the outcome today. 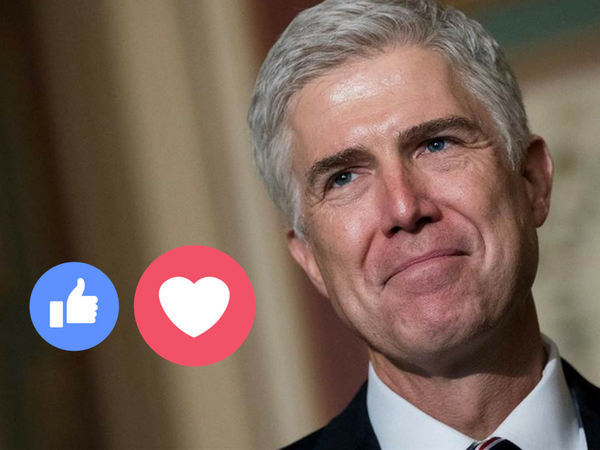 The U.S. Senate confirmed Neil M. Gorsuch to serve on the U.S. Supreme Court, capping more than a year of bitter partisan bickering over the ideological balance of the nation’s highest court.

On a vote of 54 to 45, senators confirmed Gorsuch, 49, a Denver-based judge on the U.S. Court of Appeals for the 10th Circuit. He will become the 113th person to serve on the Supreme Court and is scheduled to be sworn in on Monday.

Gorsuch replaces the late Justice Antonin Scalia, whose sudden death in February 2016 sparked a year-long partisan fight over the ideological balance of the court. He will be thrust into the final weeks of the Supreme Court’s term. The last round of oral arguments for the term is scheduled to begin on April 17, and the term ends in June.

Justice Samuel A. Alito Jr. is the most recent justice to have been confirmed during a Supreme Court term. He was sworn in the same day as his confirmation, and a ceremonial event with President George W. Bush was held the next day.

After he is sworn in, Gorsuch will restore the court’s conservative voting majority that existed before Scalia’s death. It is rumored another seat on the High Court will open up this summer. It is likely to be Justice Kennedy, who was the swing vote on the bench. No doubt, the Republicans will place yet another conservative in that vacancy, solidifying their hold over the Supreme Court. If Ginsburg should step down due to her age, then the court will be cemented in conservatism which is a very good thing.

The Democrats forced the Republicans to use the Nuclear Option here and voting Gorsuch in took a simple majority. That option will be used on the next Justice and the one after that. Gorsuch is expected to be sworn in within days, in time to hear the final cases of the term. Trump predicted to reporters aboard Air Force One that “there could be as many as four” Supreme Court vacancies for him to fill during his administration. I hope that comes to pass… one less thing to worry about.