Dick Durban Tries to Humiliate Gorsuch During SCOTUS Hearing… Gets a BOLD Response!

Dick Durbin is such a leftist weasel.[1] At today’s hearings over confirming Judge Neil M. Gorsuch as the next Supreme Court Justice, this happened… Durbin questioning: “What about LGBTQ individuals?” Gorsuch: “What about them? They’re people.” That left a mark, not that Durbin is sentient enough to realize it. Welcome to Day 2 of the Gorsuch grilling. These idiots are doing their level best to trip Gorsuch up and get him to misstep in something he says. So far, he’s outsmarted every one of them. Given, it’s not that difficult to outsmart the likes of Dick Durbin… nevertheless, it was an epic answer.

Durbin told Gorsuch[2] that President Trump would give the federal appeals court judge all he could handle if he is confirmed to the Supreme Court. Is that supposed to be some kind of threat? Fail. “You’re going to have your hands full with this president,” the Illinois Democrat said Monday, the first of four days of confirmation hearings in the Senate Judiciary Committee. “He’s going to keep you busy.” Not as busy as unconstitutional leftist asshats, I would wager. 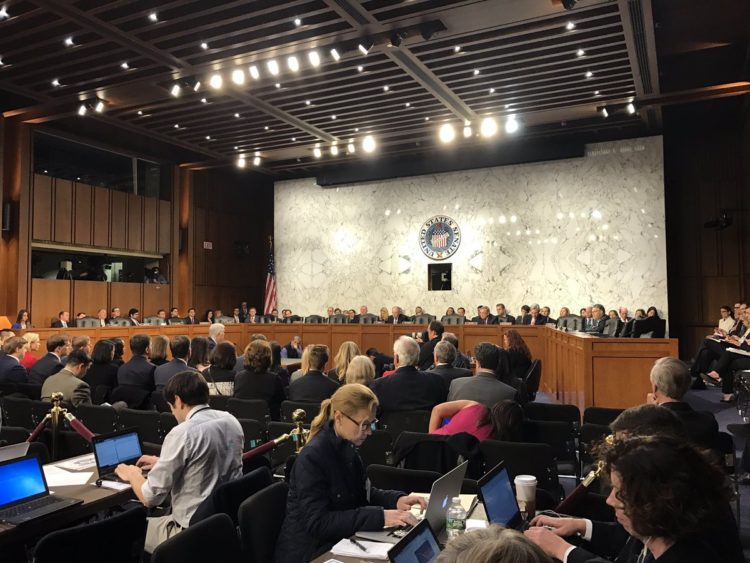 From the New York Times[4] – highlights from yesterday:

■ Senator Richard J. Durbin, Democrat of Illinois, said he wanted to know what Judge Gorsuch would do when “called upon to stand up to this president.” Mr. Durbin said, “You going to have your hands full with this president.”

■ Senator Michael Bennet, Democrat of Colorado, introduced Mr. Gorsuch, his fellow Coloradan, with high praise but stayed studiously ambiguous about how he would vote.

■ Senator Lindsey Graham, Republican of South Carolina, said, “if you believe this has been a great plan to get a Trump nominee on the court, then you had to believe Trump was going to win to begin with.”

■ Two of the most frequently mentioned people at Monday’s hearing weren’t even in the room: Judge Merrick B. Garland, the Obama administration nominee who never got a hearing, and Senator Mitch McConnell, the Republican leader who led the blockade of Judge Garland.

■ Republicans are enthusiastic and fully aboard with Judge Gorsuch. Do not expect contentious questioning from them in the days ahead.

Durbin vowed yesterday to probe Gorsuch’s record and thinking at length during Tuesday’s questioning. He wanted to spotlight the issue of independence from Trump as one area of inquiry. Durbin said he would ask Gorsuch why White House Chief of Staff Reince Priebus suggested on television that Gorsuch would share Trump’s “vision.” That referred to constitutional originalism on the High Court. Obviously, that is too deep for the likes of Turban Durbin. He’s trying to twist that statement into some kind of fascist fantasy of his… but it won’t work, simply because it’s not true.

Judge Gorsuch is one of the most brilliant men I have heard in a long time. Calm, reserved and studied, he doesn’t fall for the word games the Dems spin and throw at him. It must be frustrating for them. Just look at Schumer who is calling for chaos in the streets over Gorsuch. Keep it up, the nuclear option is on the table and the Republicans will use it. And when the next justice comes up, they’ll scream even louder. I tire of this political theater. Durbin should not try to outsmart Gorsuch… he’s ill equipped for such a stunt. Seriously.

Durbin questioning: "What about LGBTQ individuals?"
Gorsuch: "What about them? They're people." #SCOTUSnominee[5] pic.twitter.com/zkxfc6ke4m[6]